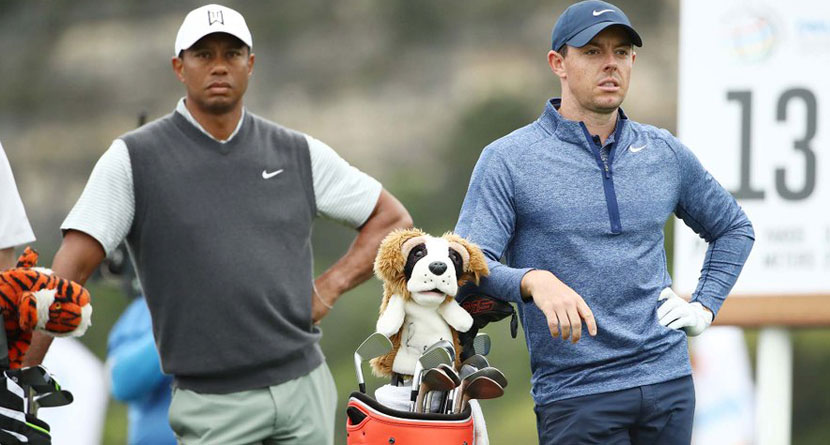 Many of the game’s top players will be heading to the Middle East next month to play in the Saudi International and they collect large sums of money for doing so. Their trade-off is a growing crowd of dissenters who object to the pros taking appearance fees from a controversial government.

Tiger Woods and Rory McIlroy, arguably the two most-recognizable players in the sport, however, are turning down the massive appearance fees and passing on the event.

According to a report from The Telegraph’s James Corrigan, McIlroy was offered the largest appearance fee he would have ever received — $2.5 million — to bring him to Saudi Arabia, but the 30-year-old turned it down anyway. As a result, Golf Saudi offered Phil Mickelson “a similar fee” and the 49-year-old accepted it, despite meaning he would have to skip the Phoenix Open, an event he has played in since 1990.


“It doesn’t matter what they’d offered, Rory was going to say no anyway,” an insider told Corrigan.

As for Woods, The Telegraph reported last year that Woods was offered the largest appearance fee of his career — $3.5 million — to tee it up at the Royal Greens Golf and Country Club in King Abdullah Economic City. He confirmed on Tuesday in the Bahamas, site of this week’s Hero World Challenge, that he was again approached to play in the event at the end of January.

Again, Woods turned down the opportunity and spoke about the decision.

“I understand the politics behind it,” Woods said. “But also the game of golf can help heal a lot of that, too. It can help grow it. And also a lot of top players are going to be playing there that particular week.

“It’s traditionally not a golf hotbed, the Middle East. But it has grown quite a bit. I remember going to Dubai for my very first time and seeing maybe two or three buildings in the skyline. Now there is a New York City skyline. Again, golf has grown. There were only a few courses when I went to Dubai and now they’re everywhere. Same with Abu Dhabi, and maybe eventually in Saudi Arabia.”

Among those who will tee it up in Saudi Arabia next month are Dustin Johnson, Brooks Koepka, Shane Lowry, Patrick Reed, Henrik Stenson and Sergio Garcia.