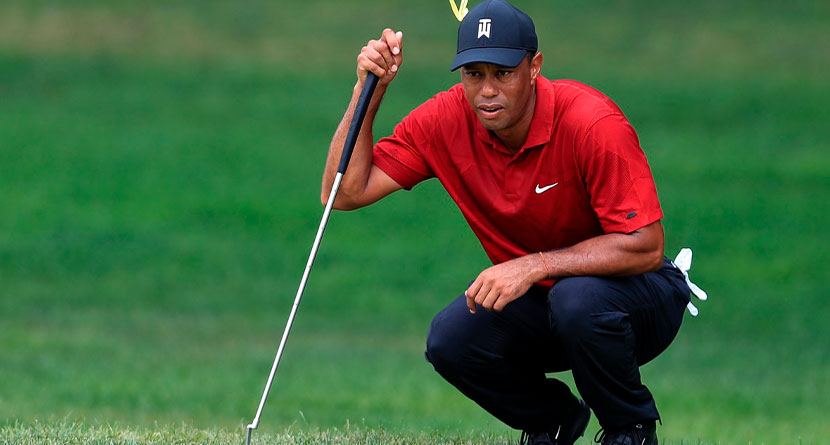 One of modern golf’s most reliable tenets may be broken this week as reports out of Harding Park, the site of this week’s PGA Championship, are that Woods will be benching his Scotty Cameron Newport 2 GSS that he has won 14 of his 15 major championships with in favor of a prototype Cameron putter.

According to Golf.com’s equipment guru Jonathan Wall, the backup putter that is expected to make its way into Woods bag when the gun goes off on Thursday, is a nearly-identical Newport 2 Timeless, very similar to the Newport 2 GSS Woods has used since 1999 with one notable exception: adjustable weights on the bottom of the club.

Throughout the course of his career, especially at Open Championships and on courses where green speeds tend to stimp on the slower side, Woods has experimented with lead tape and heavier putters to adjust for the slower green speeds.

This iteration of his Newport 2 allows him to do so by simply changing out the weights on the bottom heel and toe of the club.

Looks to be same putter he tested last year at the Open Championship. pic.twitter.com/HimwvBdiZh

While Woods didn’t make mention of the putter change or slower green speeds during his Tuesday press conference, he did mention there were a few things he has been working on at home that he’s excited about this week.

“I haven’t played that much, but the results that I’ve seen at home, (I’m) very enthusiastic about some of the changes I’ve made and so that’s been positive,” Woods said. “Keep building. Keep getting ready and be ready come Thursday.”

Pressed about the changes, Woods pled the 5th.

Later in the evening on Tuesday in San Francisco, Golf Channel’s Todd Lewis tweeted out confirmation that the backup Newport 2 Timeless would be in the bag when Woods tees off on Thursday morning alongside Justin Thomas and Rory McIlroy.

.@TigerWoods plans to use his backup @ScottyCameron putter for the @PGAChampionship instead of his famous Newport-2 putter he used to win 14 of 15 Majors. This putter is similar to old putter but has weights on the sole that he can replace to accommodate his feel on the greens.

Tiger puts a new putter into his bag for the 2020 PGA Championship. The only difference between this putter are the changeable weights. #tigerwoods pic.twitter.com/0mbyNIXrjY

New putter or not, Woods’ expectations are the same this week.

The final question of his press conference was a simple one: can you win this week?

“Of course,” he said with a smile.