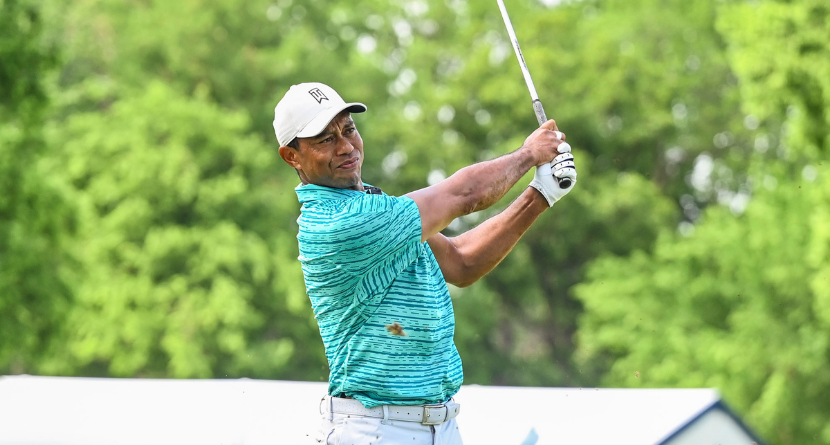 Tiger Woods has confirmed what the eyes could plainly see by the end of his stay at Augusta National: he was hurting.

The 15-time major champion had defied the odds once again to play in — and make the cut — at the Masters roughly 14 months after the injuries he sustained in a rollover crash cast doubt on the resumption of his career.

Now, though, Woods, 46, is on track to play in the season’s second major, the PGA Championship, at Southern Hills — a venue where he captured his fourth title in the event 15 years ago. And at the conclusion of a nine-hole practice round on Sunday, he said he was in a better place physically than he was in mid-April.

“I’ve gotten a lot stronger since the Masters,” Woods told reporters on Sunday. “We went back to work on Tuesday (after the Masters). Monday was awful; I did nothing and Tuesday was leg day.

“So we went right back after it. Everything is better.”

“Hundred percent I see him stronger. I just think the endurance is there now,” added Woods’ caddie Joe LaCava. “I don’t think he’s getting quite as tired as quickly. I see more endurance more than anything.”

Multiple reports indicated Woods seemed to be swinging the club without any limitations, and, perhaps more importantly, appeared to be moving well on his surgically repaired right leg.

“It’s only going to keep getting stronger,” Woods said. “The more I use it, the more strength it gains. Am I ever going to have full mobility? No. Never again. But I’ll be able to get stronger. It’s going to ache, but that’s the way it’s going to be.

🚨Tiger tees off on 11 pic.twitter.com/38qHijbx3q

“I’m excited about (the week). I’m not going to play that much going forward so anytime I do play, it’s going to be fun to play and to compete. There are only so many money games you can play at home.”

Woods returned for another nine-hole tune-up on Monday, so it does appear that, barring a set-back, we will indeed see him compete in another major championship. He’s scheduled to speak to the media on Tuesday afternoon, so stick with us for more updates.