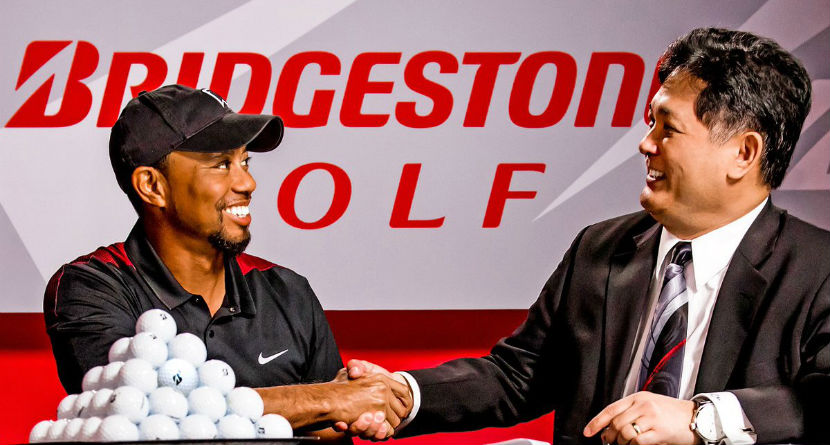 Fresh off his third back surgery, Tiger Woods was an equipment free agent at the end of 2016. During the 15 months he was away from the game recovering, Nike announced it would be leaving the hardgoods business which allowed Woods to test the manufacturer waters for the first time in a long time.

After much deliberation, Tiger settled on TaylorMade and Bridgestone golf balls. As expected, both companies were jumping for joy when the 14-time major winner chose them. With some new equipment in the bag and an ambitious schedule ahead of him, Woods seemed poised to make a comeback. Then, the season started.

Fast forward four months later and Woods is now fresh off his fourth procedure on his ailing back. He will likely be out for the majority if not, all of the 2017 season, and possibly even longer. But what does that mean for TaylorMade and Bridgestone? Golfweek’s David Dusek explains what kind of return on investment they can expect:

Bridgestone and TaylorMade won’t release monetary details of the signings, but it’s safe to assume there are at least seven figures at stake for each company. Woods doesn’t lead Forbes’ all-time list of best-paid athletes by doing things on the cheap.

The benefits of each signing, of course, is that Woods creates buzz. But that initial excitement is certainly gone now. Tiger has played 54 holes of professional golf in 2017 and might not play another. That leads to questions about the return Bridgestone and TaylorMade will get on their investment in Woods.

Typically, endorsement contracts run three or four years and pay a PGA Tour player a base sum to use a company’s equipment in exchange for the right to use his name and likeness in advertising. After that, incentives written into most deals pay a bonus for things that bring more visibility, like a top-five finish in a major, winning an event or finishing the year in the top 50 in the Official World Golf Ranking. Elite players such as Woods, Phil Mickelson, Rory McIlroy, Jason Day and a few others tend to sign more-customized, longer-term deals.

Aside from in-store displays and advertisements, the only visibility Tiger Woods has generated since withdrawing in Dubai has been for his course design business. Pros nearly always must make a minimum number of starts to earn the full base value of an endorsement deal – typically 20 or 22 events. It is realistic to think Woods negotiated a lower minimum because even when he was healthy in his prime he did not play a lot.

Some insiders see Tiger as a brand now, not a golfer. So what’s the return on investing in a relationship with him? https://t.co/t1FtrMbq5b pic.twitter.com/Wx0q9iJ5wi

When asked if Tiger has a minimum number of events he must play to fulfill the terms of his contract with Bridgestone, Corey Consuegra, Bridgestone’s senior director of marketing, said, “I would rather not talk about the terms of the deal, but what I can confirm is that it is a multi-year deal.”

Several people who are well-versed in endorsements deals echoed an interesting concept last week: They no longer see Woods as a golfer. He is now a brand. From that perspective, investing in a relationship with Woods means a company wants to align itself with what Woods represents, not what he may do on the course.

“Going all the way back to September when we chose to try to sign him, we knew there was a risk that he may not be on the course,” Consuegra said. “We studied, very closely, to determine how he affects our brand. At that point he had been off the course for 15 months. The data was extremely compelling as to why he should be a part of our brand. Even when he is off the golf course.”

Consuegra said that while Tiger is not on the course, Bridgestone will adjust how it plans to market their relationship.

“We now intend to use him more from a content and access standpoint,” he said. “I really don’t want to speak to how this may or may not be altered based on the amount of rounds (Woods plays) or the amount of competitive play. But for us, I’ll reiterate that it is not crucial that he is on the golf course. From a Bridgestone Golf perspective, it is crucial that he continues to endorse what we believe is the best balls in the industry.”

So instead of thinking about how a brand gets a positive return on an investment in Woods if he does not play competitive golf, perhaps the better question would be how does a company make fans and consumers associate the company with the future Hall of Famer if he is not playing? The answer to that would seem to be three things: money, time and patience. Probably lots of all three.