Beset By Bad Break On First Hole, Tiger Woods Shoots 6-Over 78 In Open First Round 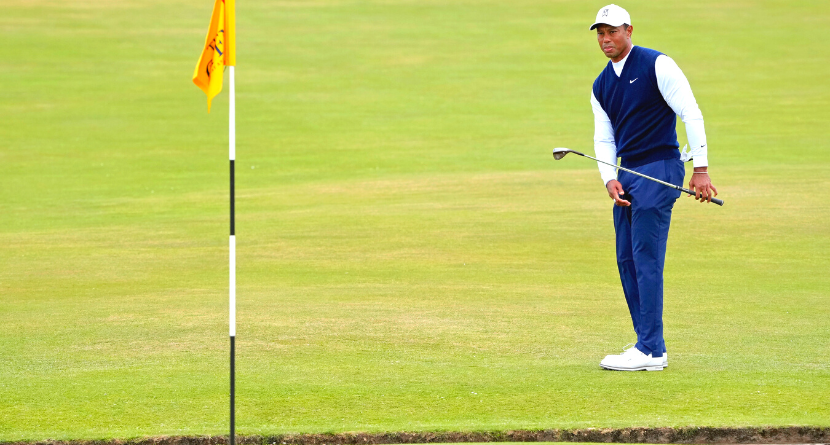 In his most anticipated major championship round in recent memory, Tiger Woods got off to an inauspicious start and never quite recovered.

Woods’ tee shot on the par-4, 376-yard first at the Old Course came to rest in a divot. He then found the burn for which the hole is named with his second, resulting in a double-bogey 6.

The 15-time major champ continued to struggle from there, carding a 6-over 78 that put him a whopping 14 shots off the early pace at the Open Championship. Making the cut, given Friday’s forecast in relation to his tee time, will be a tall order.

“[It was] probably the highest score I could have shot,” Woods said. “Didn’t get off to a great start. Hit a good tee shot down 1, ended up right in the middle of a fresh divot. I think I had maybe four or five three-putts today. Just wasn’t very good on the greens.”

Back-to-back birdies at the ninth and 10th holes momentarily steadied the ship, but Woods gave those shots back and then some coming down the stretch. He missed a short birdie putt at the last that might’ve given him some momentum heading into Friday, but it wouldn’t change the weekend calculus much. Woods needs to go very low to keep his cut streak in the 2022 majors intact.

“Well it looks like I’m going to have to shoot 66 tomorrow to have a chance.”@TigerWoods reflects on how meaningful it is to return to St. Andrews for @TheOpen. pic.twitter.com/IVlJhiVOOp

“It was a lot easier today, physically, than it has been the other two events, for sure,” Woods said.

His normally sublime feel for lag putting appeared to leave him for the day. And it certainly didn’t help matters for Woods — or his playing partners — that the round took over six hours to complete.

“I felt like I needed to call my [physical therapist] and get him to stretch me back out,” said Max Homa. “It was just an insane amount of waiting.”