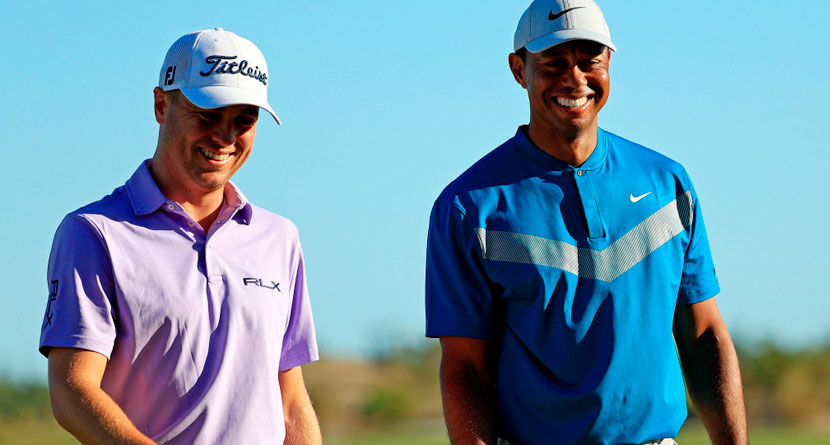 Playing alongside Tiger Woods comes with a few caveats, which includes, but is not limited to large crowds, big cheers and long first-tee announcements.

Justin Thomas, ranked No. 4 in the world currently, is used to the controlled chaos that follows around his friend and competitor, but on the first tee of the first round at this week’s Hero World Challenge where the two were paired together, Thomas couldn’t help but laugh when it came to the pair’s respective introductions.

Woods was first on the tee and received an introduction commensurate with his status as the reigning Masters champion, former winner of the event and the tournament host. Thomas, on the other hand, had a much shorter intro.

The pair would have a good laugh about the discrepancy, and when their 54-hole scores put them both at 11-under par, they were paired together once again for the final round.

This time, however, Thomas got a much more robust introduction that included high school accolades from a decade ago, undoubtedly Woods’ doing.

Sounds like @TigerWoods made sure @JustinThomas34 got a proper introduction in the final round. ? pic.twitter.com/E3y7AQ7MZk

Woods would go on to best Thomas by one on the day, and therefore the tournament, but his biggest victory came on the first tee.

Of course, the Woods first-tee introduction has long been a lopsided affair even when playing against some of the most accomplished players of the era. The best example remains Woods’ 2002 Tour Championship intro alongside Phil Mickelson.

As the announcer ran down a laundry list of accomplishments, Mickelson cut her off with an “Alright, alright, we know…”

By 2002, even Phil was sick of hearing about all Tiger's wins. pic.twitter.com/K3lw5LZlOi