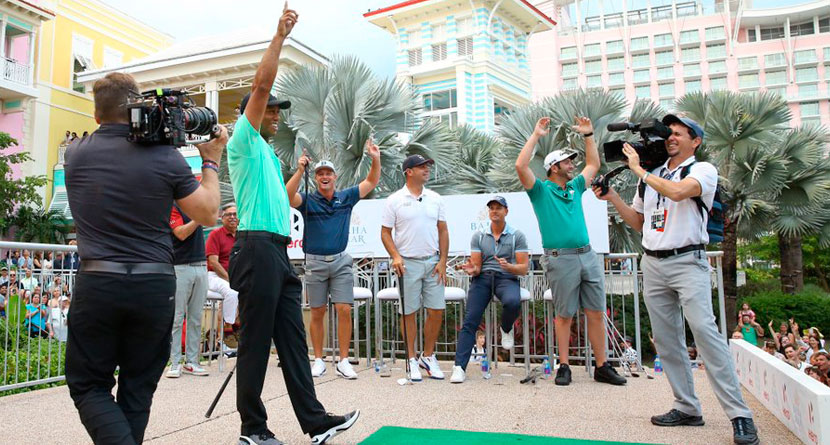 No, it doesn’t count as win No. 83 on the PGA Tour — and neither would a victory later this week at the Hero World Challenge — but Tiger Woods’ Monday in the Bahamas was much improved by him taking home the trophy paddle of the inaugural Hero Shot at Baha Mar.

The Monday exhibition, which pit Woods against Bryson DeChambeau, Jon Rahm, Jordan Spieth, Henrik Stenson and Gary Woodland in a closest-to-the-pin contest of sorts, was won in dramatic fashion by the tournament host after he unleashed a signature club-twirl as his ball headed toward the target over the “Reflections Pool” at the Grand Hyatt Baha Mar.

Beginning with three head-to-head matchups, each player hit six balls to a target that featured 1oo, 200 and 500 points for the respective rings. In the first round, Woods defeated DeChambeau, Spieth defeated Woodland and Stenson defeated Rahm to advance to a three-person, two-best score semifinal.


Woods and Spieth dispatched of Stenson to go head-to-head on the elevated 100-yard hole. Spieth, feeling confident, offered a challenge to Woods before the final six-ball shootout began: the first ball has to draw over the framing palm trees on the right while the second had to cut over the palms on the left.

Kicking off the Hero World Challenge in style. ?@TigerWoods@B_DeChambeau@JonRahmPGA@JordanSpieth@HenrikStenson@GaryWoodland

“Great, just challenged the best ball-striker this game has ever seen,” Spieth said to himself after making the challenge, according to Golf.com.

Spieth put up a solid 900-point round, but that was matched by Woods through his first five shots. With one ball left, and a two-times multiplier for the final ball, all Woods had to do was hit the target.

Sealing the victory in style. ?

The winner of the 2019 Hero Shot at Baha Mar, @TigerWoods! pic.twitter.com/T0K9rXbxfu

The tournament proper kicks off on Wednesday and runs through Saturday. The audible on a normal Thursday-Sunday tournament was called to allow Woods and those members of the U.S. Presidents Cup team traveling from the Bahamas an extra day of acclimation for next week’s Presidents Cup.