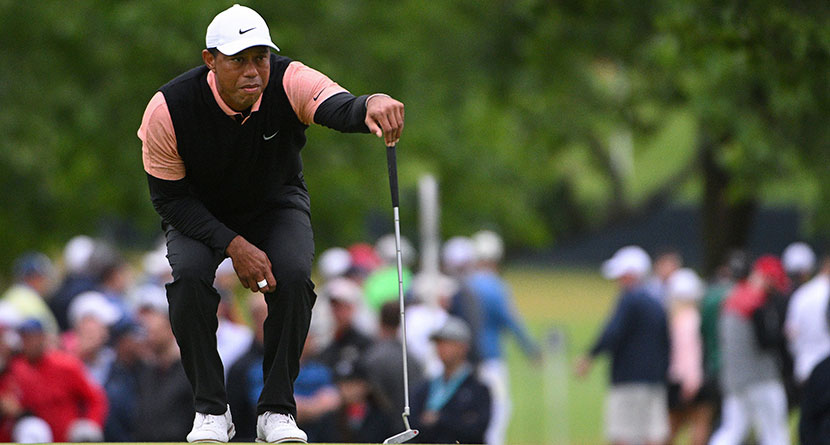 After making the cut in his second major championship start of the season at the PGA Championship this week, Tiger Woods withdrew from the event following a third-round 9-over par 79 on Saturday evening in an announcement from the PGA of America.

Seemingly uncomfortable in each of his three rounds at Southern Hills Country Club, Woods did not speak to the media following his third round.

He told a pool reporter that he and his team would “do some (recovery) work and see how it goes.”

A few hours later, Woods withdrew from a major championship mid-tournament for the first time as a professional.

Tiger Woods has withdrawn after Round 3 from the 2022 PGA Championship. pic.twitter.com/I4TiYAgvoM

Woods opened with a 4-over par 74 before battling back to shoot 1-under par 69 on Friday to make the cut with one stroke to spare. On Saturday, Woods made seven bogeys, one triple and one birdie to shoot 79.

The 15-time major champion has been noncommittal about whether or not he will play at next month’s U.S. Open at The Country Club at Brookline, but after he finished 72 holes at the Masters, Woods committed to playing in July’s 150th Open Championship at the Old Course at St. Andrews.

Tiger Woods confirms that he WILL play at The Open in July, but is unsure if he’ll take part in the PGA Championship in May ⛳pic.twitter.com/oq75rNuiDm