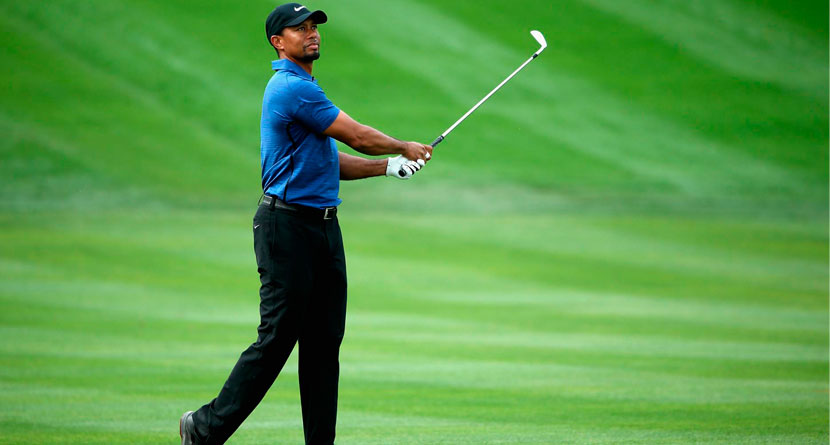 Tiger Woods’ aggressive schedule to return from a 16-month layoff has hit yet another roadblock. Woods announced on his website on Friday that he would not be competing in next week’s Genesis Open or the following week at the Honda Classic.

The announcement comes one week after Woods withdrew from the Omega Dubai Desert Classic citing back spasms.

Here is the full statement from Woods’ site.

Tiger Woods announced Friday that due to ongoing back spasms, similar to what he experienced in Dubai, he will be unable to compete in the Genesis Open and The Honda Classic.

“My doctors have advised me not to play the next two weeks, to continue my treatment and to let my back calm down,” Tiger said. “This is not what I was hoping for or expecting. I am extremely disappointed to miss the Genesis Open, a tournament that benefits my foundation, and The Honda Classic, my hometown event. I would like to thank Genesis for their support, and I know we will have an outstanding week.”

Tiger is expected to travel to Los Angeles to attend and support the PGA TOUR event. His possible playing schedule after Honda will be determined at a later date after his back is reassessed.

Tiger Woods’ comeback has been put on hold. https://t.co/b6aCqTLQ5H pic.twitter.com/z1LYEEkfxR

GolfChannel.com’s Will Gray added some perspective and responses to the latest Woods withdrawal.

This latest setback is a significant blow for Woods’ most recent – and most ambitious – comeback attempt. He was expected to play four events in a five-week stretch in order to test his game, culminating with next week’s Honda Classic, but thus far has played only three competitive rounds without breaking par.

“Like everybody in golf, we continue to pull for Tiger to get back to being 100 percent healthy and playing the level of golf which he and all of us have enjoyed for two decades,” Honda Classic executive director Kenneth Kennerly said in a statement.

Woods told reporters in Dubai that his revamped swing was designed to “play away from pain,” but he denied any injury concerns after an opening-round 77.

“No, I wasn’t in pain at all,” Woods said last Thursday. “I was just trying to hit shots and I wasn’t doing a very good job.”

Woods withdrew prior to hitting a shot in Round 2, and his agent Mark Steinberg told reporters that Woods had suffered an overnight back spasm that prevented him from making “a full rotation on the swing.”

After he sat out more than a year to recover from multiple back surgeries, Friday’s announcement marks Woods’ third – and fourth – tournament withdrawal in the last five months. He also withdrew from the season-opening Safeway Open in October just days after formally committing, stating that his game was “vulnerable.”

Woods has completed only one 72-hole tournament since August 2015: the Hero World Challenge in December, when he led the field in birdies but also finished 15th among 17 participants.