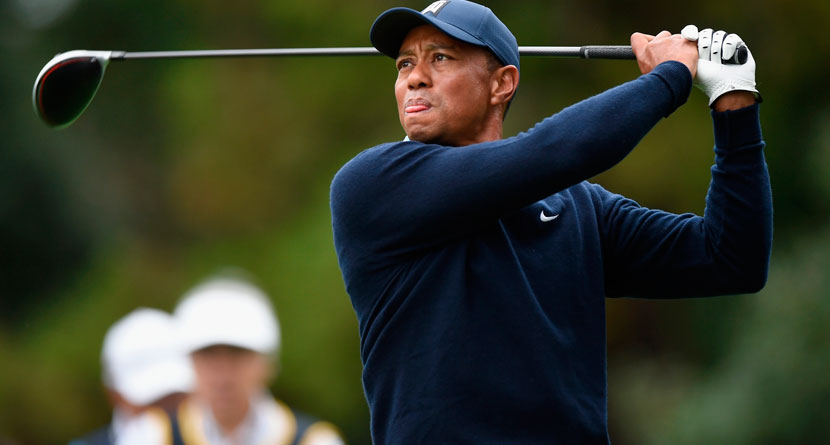 No one’s ever accused Tiger Woods of being a fast starter, but even by his standards, his start to the Zozo Championship, his first event of the 2019-20 PGA Tour season was poor.

By the time television coverage began in the United States, “Tiger Woods, +3/3” had been splashed across Golf Channel’s airwaves in the hour build-up, but when the lights came on, Woods played the best golf of anyone in the strong 78-player field.

“That was a very ugly start,” Woods said of his first three holes that featured a water ball off the first tee, another pull hook into the trees on his second hole and a three-putt on his third green, leading to back-to-back-to-back bogeys. Trying to get back under par for the round, Woods even surprised himself by going on an incredible run that featured nine birdies over his last 15 holes to tie Gary Woodland for the first-round lead.

“To be able to flip it like that, I felt if I could get to under par after that, I figured most of the guys would be about 2, 3-under par with the wind blowing as hard as it was today — that I wouldn’t be that far behind,” Woods said. “It flipped, and I got hot and made a bunch of putts.

“I just tried to hang in there. I was trying to turn the round from 3 over par to even par at the turn. And I made a bunch of putts. My putter has felt good. I’ve rolled it nicely. I’m just trying to give myself good looks at it. And I didn’t give myself any looks the first three holes. I felt my iron game was sharp and figured if I could get the ball in a position where I can attack, as soft as they are, I figured I make a few. And I made more than a few.”

– 64; lowest round worldwide in ’19
– Lowest score to begin PGA Tour season in his career
– 3 fairways hit; lowest score of career w/3 or fewer hit
– 9 birdies, 1 shy of career-high in a PGA Tour round
– Most birdies made in PGA Tour Rd since ’13 Doral

It was a day of headscratchers. After the poor start, Woods hit 15 of his last 16 greens despite only finding three fairways over the course of the first round at Accordia Golf Narashino Country Club. Making things even more impressive, hitting 15 greens, Woods needed only 27 putts to get around the par-70 layout that he first saw on Monday during his skins game exhibition.

The challenge is far from over as a typhoon is forecasted to bring high winds and heavy rain to the area over the next 24 hours. Officials have moved up the second round tee times in hopes of getting some golf in before the storm hits.

Woods is joined by Gary Woodland atop the leaderboard through 18 holes with Japan’s own Matsuyama only a shot back. Woods will now tee off at 7:40 p.m. ET on Thursday alongside Tommy Fleetwood Satoshi Kodaira.