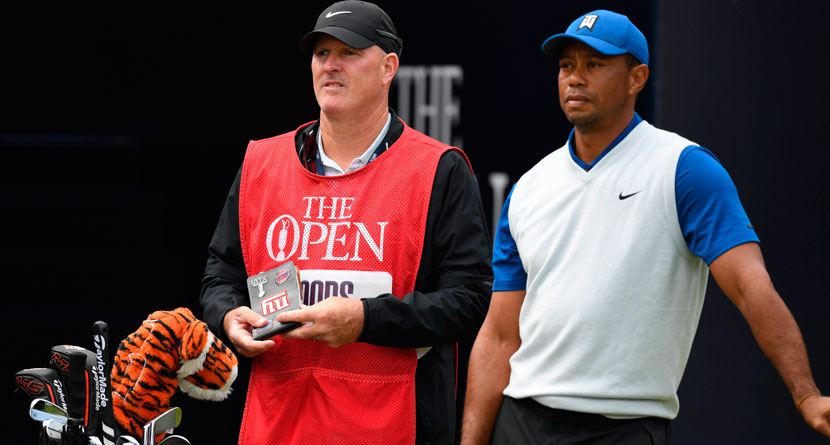 There are plenty of skeptics when it comes to Tiger Woods and his decision to partner with Discovery and GOLFTV as an exclusive content partner, but it’s hard to argue with the more humanizing videos the entity has put out with Woods and his caddie, Joe LaCava.

The duo, which paired up in 2011, has been through some of the leanest years of Woods’ career as he battled back from scandal and multiple injuries to reach the pinnacle of professional golf earlier this year at the Masters, which makes their relationship all the more special.

Debuting a new segment on GOLFTV’s social channels, Woods and LaCava took fan questions and gave some insight into Woods life on and off the course. One of the things to make waves from the video was a question about what Tiger keeps in his golf bag.

“I would say two things that people might not know: Your crunchy peanut butter banana sandwiches, and then the fact that you have to have a Milwaukee sharpie versus just a regular sharpie,” LaCava said. “I don’t know what the deal is there but you like those Milwaukee sharpies.”

And the sale of Milwaukee sharpies just went up.

While the markers thing was interesting, perhaps more surprising was Woods’ answer to a question about his golf course bucket list.

“People are probably going to say that this is a little bit surprising, but I’ve never played Pine Valley,” Woods said. “I know it’s always rated every year as the No. 1 course in the world, but I’ve never been there.”

Despite his boss never having stepped foot on the George Crump design, LaCava responded that he had, and “it’s a pretty good spot.”