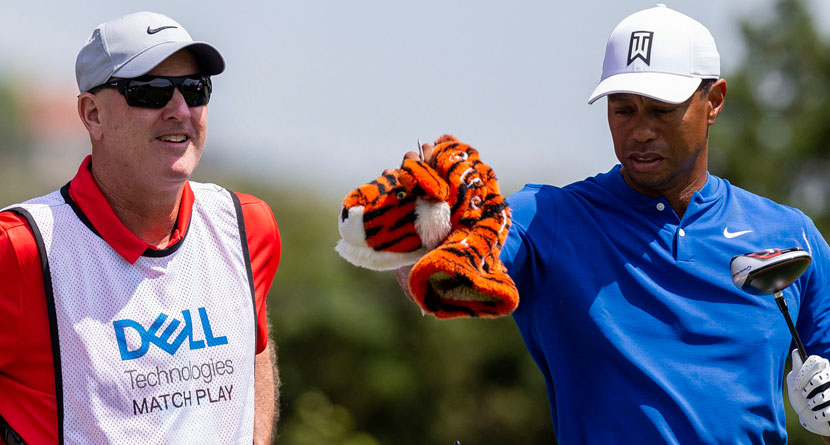 Tiger Woods’ caddie, Joe LaCava, was inducted into the Caddie Hall of Fame on Wednesday night at a ceremony held at Medinah Country Club, site of this week’s BMW Championship.

A professional looper for over 30 years, LaCava came on the scene in 1987 to caddie for his cousin, Ken Green. In 1990, he got the call to carry the bag for Fred Couples, which he would do for the next 20 years en route to 12 PGA Tour wins, including two Players Championships as well as Couples’ lone major championship victory: the 1992 Masters.

“I’m overwhelmed tonight,” LaCava said, according to The Caddie Network. “I love caddying because I’m just competitive and I hate losing. That’s what it’s about for me. I’m all about winning and having my guy win.”

LaCava had a brief stint with Dustin Johnson in 2011 before a surprise phone call came late in the year. LaCava detailed the conversation during his induction on Wednesday night.

When Tiger asked Joe to be his caddie…

The move was a bit of surprise considering Johnson’s pedigree and Woods’ struggles at the time of the decision, but when asked by ESPN.com’s Bob Harig about why he made move in October of 2011, LaCava had a simple response.

Woods and LaCava would go one to win seven times (so far) on the PGA Tour, including their breakthrough at the Masters earlier this year.

“A Hall of Fame career, a great and trusted friend and one of the best in the business,” Tiger tweeted after the ceremony. “Thanks Joey and congratulations!”

A Hall of Fame career, a great and trusted friend and one of the best in the business. Thanks Joey and congratulations! pic.twitter.com/dSoNr7Fxy8

According to The Caddie Network, The Caddie Hall of Fame was created in 1991 by the Professional Caddies Association, with the Western Golf Association taking over formal administration in 2011. Notable members of the Caddie Hall of Fame include Jack Nicklaus, Tom Watson, Charles “Chick” Evans, Francis Ouimet, Mike Keiser, Thomas Friedman, the Murray Brothers and Peter Ueberroth.