Tiziani An Agent, A Caddie, A Player In Champions Playoffs 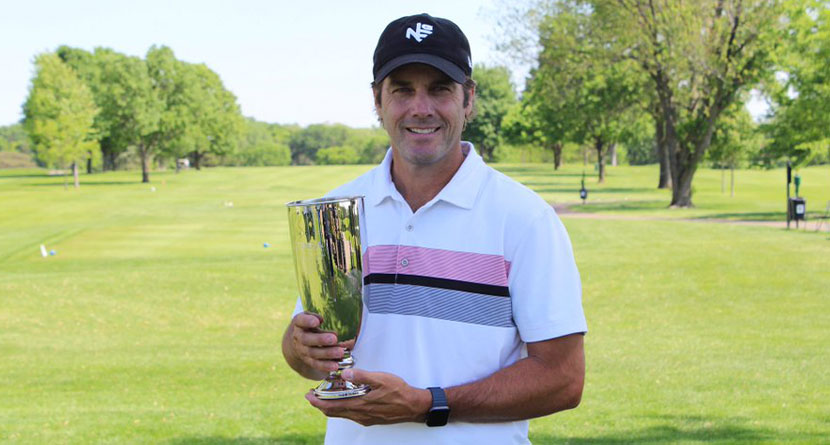 Mario Tiziani wrapped up a 2-under 70 on the PGA Tour Champions that kept him out of the top 10 by one shot, and then he changed hats from player to agent as one of his top clients, brother-in-law Steve Stricker, won the Constellation Furyk & Friends.

It was the 11th tournament Tiziani played this year, some on an exemption, some through Monday qualifying. He also caddied for Stricker at the U.S. Senior Open and the Boeing Classic. And his work at MGC Sports doesn’t go away.

All that, and the 52-year-old Tiziani still managed to make it to the Charles Schwab Cup postseason.

This wasn’t on the menu when Tiziani, who played one year on the PGA Tour, left competitive golf in 2010. He got his amateur status back with intentions of dabbling in local events, but even that didn’t interest him.

And over the holidays in 2020, he was offered an exemption to the American Family Insurance Championship in Wisconsin the following June. Stricker is the tournament host.

“I kind of chuckled. I hadn’t played golf the most part of 12 years,” he said.

And so he began to practice. He tried pre-qualifying for Monday qualifiers. He won the Minnesota Senior Open the week before his PGA Tour Champions debut in Wisconsin. He won the Wisconsin Senior Open a few months later.

Road to status requires 18 extra holes. @MarioTiziani has qualified four times and is coming off his career-best finish.

With eyes on the Schwab Cup Playoffs, he’s gearing up for another qualifier next week @FurykandFriends.

Tiziani learned he could during a very busy year. It helped that his sister, Nicki Stricker, was able to caddie more often for her husband than during the COVID-19 pandemic. He pieced it all together and then really cashed in last month at Pebble Beach.

He was in a 4-for-1 playoff when one of players, Alan McLean, hit his second shot to a par 5 at Blackhorse to 2 feet.

“I canned with 35-footer to match his eagle and ended up getting through,” Tiziani said. He tied for seventh with a closing 67, and his tie for 14th a week later put him at No. 61 in the Charles Schwab Cup standings. The top 72 advance to the postseason.

So the full-time sports agent, part-time player and occasional caddie is going to the Schwab Cup playoffs, while is brother-in-law is in a tree with a bow hunting deer. Stricker is No. 3 in the standings, but he has never played much in the fall even on the PGA Tour.

Tiziani will need his best result at the Dominion Energy Charity Classic in Richmond, Virginia, to be among the top 54 who advance. No matter. It’s already been a big year for him.

“I’ve done well for 11 events to able to get into the playoffs,” said Tiziani, whose season earnings are just over $225,000. “Not as good as my brother-in-law in 11 events, but he’s from a different planet.” Stricker won four of the 12 tournaments he played this year.

It’s been a decent year for the extended family.