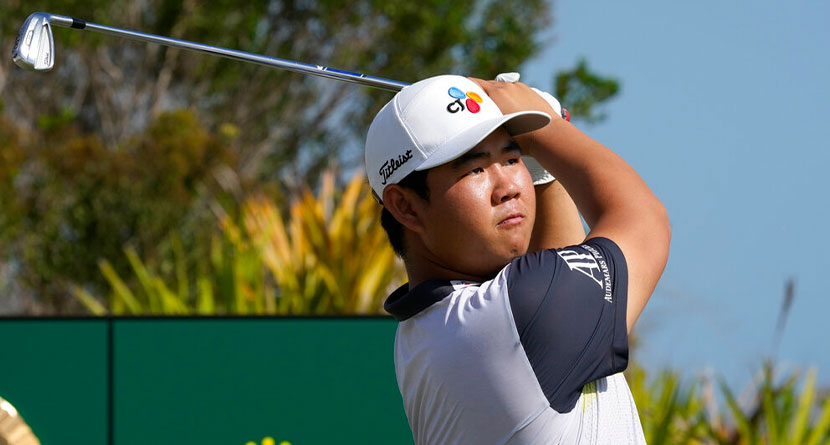 KAPALUA, Hawaii (AP) — He was listed as Joohyung Kim when he played in the 2020 PGA Championship at Harding Park as an 18-year-old, and when he nearly won the Genesis Scottish Open last summer on a sponsor exemption.

Now he’s known by his nickname — Tom Kim — and by his game. The 20-year-old South Korean won the Wyndham Championship, delivered a big performance in the Presidents Cup and outdueled Patrick Cantlay in Las Vegas at the Shriners Children’s Open.

He also is the latest member of the Nike family.


Kim arrived at Kapalua sporting the swoosh on his cap, his shirt and his shoes, part of an endorsement deal he signed during the short offseason.

“It’s very cool for me,” Kim said. “Nike is definitely a brand where they only look at top players and I’m very, very grateful they thought about me. I think it’s a great move. It looks cool and I’m glad to be part of the swoosh team.”

🚨JUST IN: Tom Kim has signed a head to toe apparel and shoe deal with Nike Golf. @TomKimLegion pic.twitter.com/coxpBWCpLL

He previously was sponsored by South Korea-based conglomerate CJ Corp., the title sponsor of the CJ Cup on the PGA Tour and seen on the caps and apparel of several South Korean players such as Sungjae Im, K.H. Lee and Si Woo Kim.

It’s a deal that reflects a more global nature of Tom Kim, who already is popular among his peers with his game and sense of humor. Kim was born in South Korea and his family moved to Australia, and later to the Philippines.

“I wanted people to see on TV that I am Korean, but I’m also not just an Asian,” said Kim, who speaks Korean and English with equal ease, and still knows a little Tagalog. “I’m the only Asian golfer on the Nike team.”

K.J. Choi, a pioneer for men’s golf in South Korea, was with Nike during his peak years.

Also important to Kim was his time, and with minimal sponsorship, that helps.