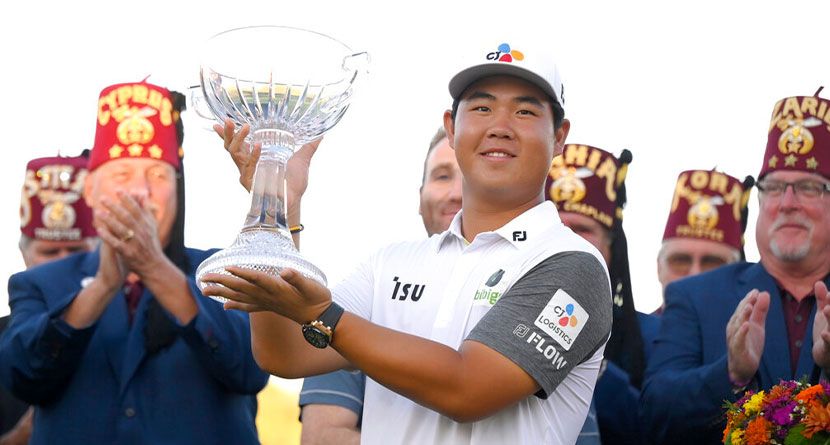 LAS VEGAS (AP) — Tom Kim still didn’t have PGA Tour status two months ago. Now he’s a two-time winner being mentioned in the same space as Tiger Woods and is the highest-ranked Asian player in the world.

Even for the 20-year-old Kim, life feels like it’s moving at warp speed.

A win in North Carolina. The FedEx Cup playoffs. The Presidents Cup. A win in Las Vegas.

“It’s been crazy,” Kim said. “Definitely doesn’t feel slow, that’s for sure. I’ve just got to keep going, and I’m enjoying the ride. So hopefully, many more to come.”

His latest victory Sunday in the Shriners Children’s Open was only shocking the way it ended, with Patrick Cantlay having one bad swing turn into one big mess.

They were tied for the lead when Cantlay hooked his 3-wood into a desert bush in a ravine, tried to hack it out into the fairway, took a penalty drop, went into the water and then made a 35-foot putt for triple bogey.

That paved the way for Kim to cap off a bogey-free week at the TPC Summerlin with a simple par for a 5-under 67 and a three-shot victory.

A triple bogey on the 72nd hole for Patrick Cantlay to lose by 3.

“Obviously, the last hole makes the whole week kind of sour,” said Cantlay, who could have gone to No. 2 in the world with a win.

Kim became the first player since Tiger Woods in 1996 to win twice on the PGA Tour before turning 21. The 20-year-old South Korean won the Wyndham Championship in August to earn a tour card and he’s been soaring ever since.

But he needed some help from Cantlay at the end of a compelling back-and-forth along the back nine at the TPC Summerlin.

They were tied going to the 18th. Cantlay was first to play and hooked a 3-wood left of the fairway into a desert bush in a ravine.

Kim belted driver into the fairway and by the time he finally played his second shot to the green, Cantlay was lying four in the bottom of the pond.

Cantlay tried blasting out of the bush to no avail. He took a penalty drop. He then hit out of the desert sand and into the pond. Cantlay’s triple bogey for a 69 gave him a share of second place with Matthew NeSmith (66).

“I figured the only chance I had was to get it in the fairway,” Cantlay said about his decision to try to play from out of the bush. “I played well — one bad swing at the end. Obviously, I would have liked to have closed the deal out today, but sometimes that’s golf.”

Kim became the first player since J.T. Poston at the 2019 Wyndham Championship to win a PGA Tour event without making bogey. The way the back nine was going, no one could afford to drop any shots.

Cantlay’s 35-foot putt for triple bogey was worth $160,000, but that was small consolation. It was his third disappointment in Las Vegas, the site of his first PGA Tour win. He lost in a playoff to Kevin Na in 2019 and had a share of the 54-hole lead the following year until a poor final round to tie for eighth.

“I played solid this week — no bogey for 72 holes,” Kim said. “I got very lucky on the 18th, I’m not going to lie. Patrick played awesome, and to come out with a win I feel fortunate.”

Woods was 20 when he won in Las Vegas and then at Disney in just seven tournaments since turning pro. Kim now is the second-youngest player to win two PGA Tour events before turning 21, a month behind Ralph Guldahl when he won the 1932 Arizona Open for his second win.

It’s been quite the year for Kim, who honed his golf in Australia and the Philippines before turning pro. He started this year by winning the Singapore International and finishing runner-up in the Singapore Open on the Asian Tour.

After winning the Wyndham Championship, he made his debut in the Presidents Cup by going 2-3-0 for the International team and delivering one of the biggest moments with a 10-foot birdie putt in fourballs in a 1-up win over Cantlay and Xander Schauffele.

Next up is the Zozo Championship in Japan for Kim, who goes to No. 15 in the world and becomes the highest-ranked Asian player, moving ahead of Hideki Matsuyama of Japan.