Finau Has Billionaire Filling In As Caddie At Hero World Challenge 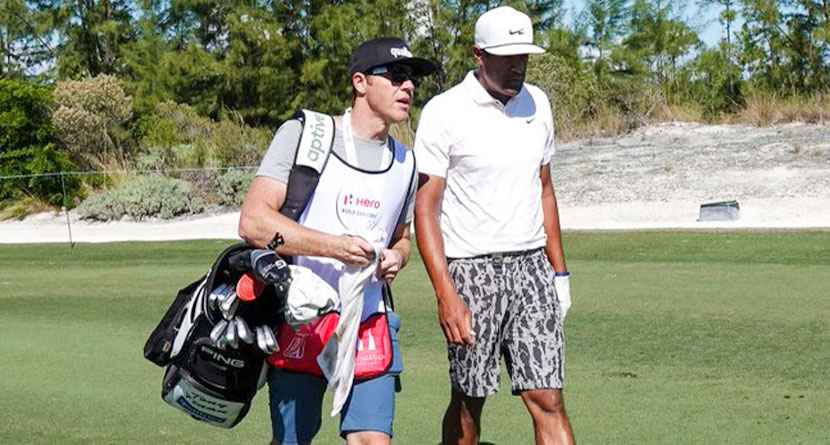 It’s not unusual to find the best golfers in the world hob-knobbing with millionaire and billionaire business people at events around the globe.

What is unusual, however, is to see one of those ultra-wealthy folks working for a Tour pro, but that’s exactly what is taking place this week at the Hero World Challenge in The Bahamas.

Tony Finau will have billionaire businessman Ryan Smith toting his bag around Albany Golf Course this week after his regular caddie, Mark Urbanek, opted to skip the trip due to the anticipated birth of his child.

News broke on Tuesday when Golf Digest’s Daniel Rapaport noticed Finau playing a practice round without a caddie. Inquiring about the situation, Finau told Rapaport, “”Gonna have a friend caddie for me. Ryan Smith. He just bought the Jazz.”

Finau said he’s known Smith, who grew up in Oregon before migrating to Utah to study at Brigham Young University’s Marriott School of Business in Provo, for years, “Since he had zero dollars in his bank account.”

Today, Smith’s got a lot of dollars in his bank account with Forbes estimating his net worth at $1.5 billion.

“Ryan has been a good friend of mine. I gave him a shout about six weeks ago and asked him if he would mind. He was more than happy to be here. He’s been a great friend and a great mentor,” Finau told GolfChannel.com’s Rex Hoggard.

Finau said he and Smith had been talking about getting the billionaire on the bag for a while, and the unofficial, no-cut event offered the perfect opportunity.

“He’s taking an extreme pay cut, I know that,” Finau said. “It’s a fun atmosphere and the perfect tournament to bring Ryan along.”

To Smith’s credit, he already has shown he understands the No. 1 rule of caddieing: the three “ups.”

Finau won’t be the only player in the 20-man field using a fill-in caddie. Xander Schauffele, the No. 4-ranked player in the world, will be without usual bagman Austin Kaiser this week who is ill with a non-Covid-related flu.

Picking up the slack for Schauffele is Max Homa’s regular caddie, Joe Greiner.

Xander Schauffele’s caddie Austin Keiser is out with the flu—not COVID!—and so he’s got @maxhoma23’s looper Joe Greiner on the bag this week.

Last place pays $100,00, and Xander’s not finishing last. You do the math. Decent side gig! pic.twitter.com/kQkzZyTIjt