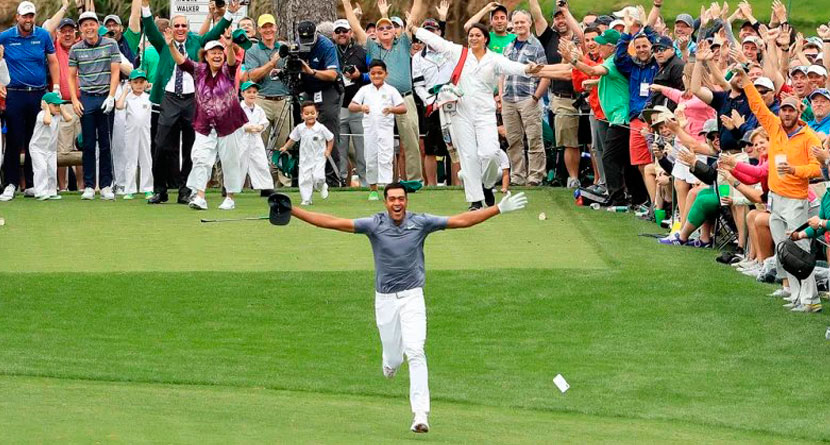 If making a hole-in-one is every amateur golfer’s dream, sinking an ace during the Wednesday Par-3 Contest at the Masters has to be up there on the bucket list for professional golfers. Tony Finau made that dream a reality on Wednesday at Augusta National, but the emotions and actions that followed the ace may have put his first career Masters start in jeopardy.

Finau played a shot on the seventh hole of Augusta National’s Par-3 course to perfection, landing out to the right of the pin and watching as the shot’s backspin coupled with the slope of the green sent his ball crashing into the flagstick. Leaving his wife and four children who were caddying for him behind on the tee box, Finau began a celebration that looked more at home on a soccer pitch than a golf course.

Good grief, Tony Finau wrecked his ankle celebrating a hole in one pic.twitter.com/8o7JxVi3xQ

Related: Nicklaus, Watson Turn Back The Clock At Augusta

Finau dislocated his ankle during his backpedaling towards the green, popped it back into place and limped back towards his family. The injury didn’t seem to cause too much trouble as the 28-year-old finished the out the remaining two holes, finishing at an unofficial 1-under par.

Following the conclusion of the event, Finau told GolfChannel.com’s Rex Hoggard he was going to the training building to get his ankle looked at. Later in the evening, Golf Channel’s Todd Lewis confirmed what everyone saw live, tweeting that x-rays showed no breaks and a Thursday morning MRI will give a better idea of his ability to tee it up.

Indeed @tonyfinaugolf did dislocate his left ankle today during the Par 3 contest but immediately put it back in place. X-rays tonight revealed no breaks. Will have an MRI tomorrow morning. If results are positive and swelling is under control will try to play @TheMasters.

Crazy day. Thanks for thoughts of concern, messages and prayers from all. I’m optimistic. https://t.co/m9y5T1a9Uy

On Thursday morning, ESPN’s Marty Smith confirmed that Finau has been cleared to play.

Great news for @TonyFinauGolf: Finau had an MRI this morning, which cleared him to play @TheMasters, Finau’s manager told me.
Finau’s plan is to play.

Finau is slated to go off at 12:43 p.m. alongside Bernhard Langer and Yuta Ikeda.