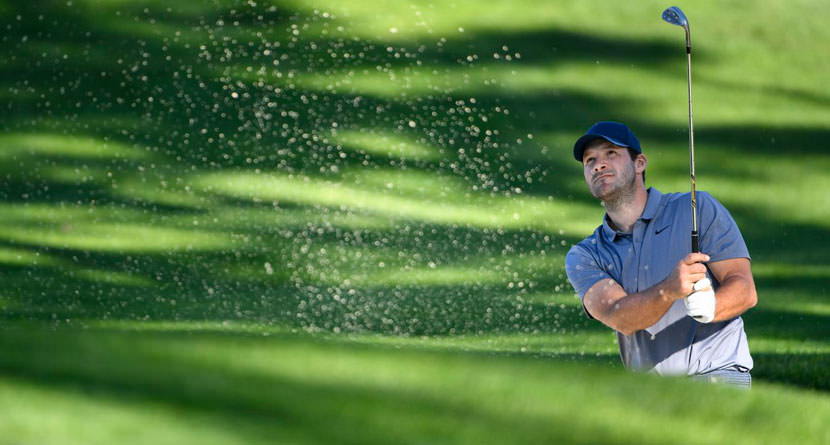 Former Dallas Cowboys quarterback-turned-broadcaster Tony Romo will make his official PGA Tour debut in three weeks at the Corales Puntacana Resort & Club Championship, but if a recent mini-tour tournament is any indication, it may be his first and last start on Tour.

Romo teed it up in a North Texas PGA Players Tour event at Bridlewood Golf Club in Flower Mound, Texas, about 30 miles northwest of Dallas. After a rocky start to the tournament and apparently with a flight to catch, Romo withdrew from the event with nine holes remaining.

Word is that Romo WD'd from the second round because there was a lengthy rain delay and he had to catch a flight. https://t.co/dUFMpE8QGI

Romo was 11 over at the time of his withdrawal, which came after a lengthy rain delay as Romo needed make a flight, per PGATour.com’s Sean Martin. The former Dallas Cowboy shot 9-over 81 in Monday’s opening round at Bridlewood Golf Club in Flower Mound, Texas. He bogeyed his first hole, the par-4 first, before carding a quintuple-bogey-10 on the par-5 second. He added a triple bogey at No. 5, bogey at No. 6 and a birdie at No. 9 to card a 45 on his front nine.

He did play his next 18 holes in just 2 over with two birdies.

Romo competed in the amateur portion of the AT&T Pebble Beach Pro-Am earlier this month, serving as the amateur partner for first-year pro Will Zalatoris, and drew solid reviews. The duo shot 17 under in 54 holes and missed the cut by three shots. Kevin Streelman and NFL wide receiver Larry Fitzgerald were 29 under after three rounds before winning the pro-am event at 41 under.