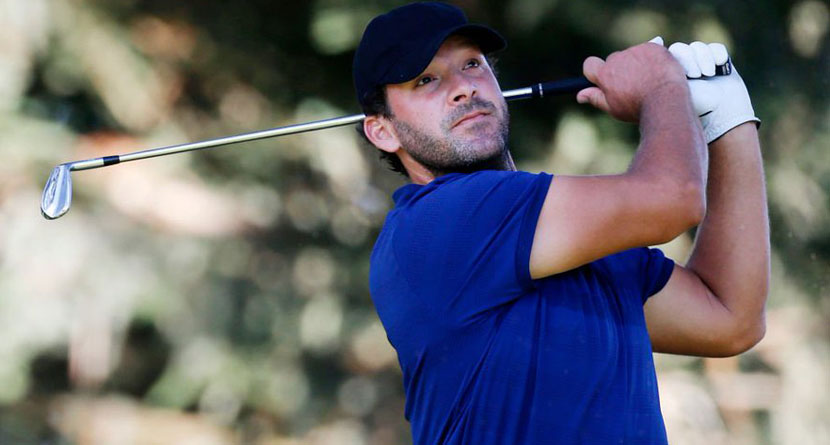 Tony Romo proved on Thursday at the Safeway Open that he’s not just a sideshow sponsor exemption after the former Dallas Cowboys quarterback shot a 2-under par 70 to tie for 28th after the first round.

Among the notables that are looking up at Romo on the leaderboard include Phil Mickelson (75), Justin Thomas (71), Hideki Matsuyama (72) and Colin Morikawa (72).

“Every time I play in one of these events, get lucky enough to get an exemption, I kind of get a chance to see what you’re not good at,” Romo said. “Very apparent it was putting over the last year so just a lot of work put into it. I’ve been putting well, so it was nice to come out here and keep that going.

“If you’re going to do something, you want to do it well. It’s embarrassing to stink, and I stunk a lot. Same thing I did in football. You just start from the beginning, you’re not very good, not very good, and then all of a sudden you make the leap somewhere and all of a sudden you can be more efficient and you can do things a little bit better.”

Romo’s bugaboo in his earlier PGA Tour starts was his strength on Thursday in Napa. He made over 120 feet of putts and picked up more than three strokes on the field average on the green.

Romo faces an interesting predicament if he plays as well again on Friday. Making the cut in California will make his scheduled weekend plans to call the NFL game between the Minnesota Vikings and Chicago Bears an issue.

“It’s a good problem to have,” Romo said.

With Tony Romo at -2 after the first round, here are a couple of columns I’ve written over the past week.
1. Tony Romo could miss a CBS game as he tries to make the cut on a PGA event. https://t.co/LCpByxvBnL
2. Boomer Esiason is CBS’ backup QB for Sunday. https://t.co/2rvB4LZ8Wg

Romo tees off on Friday in his second round at 4:25 p.m. EST alongside Beau Hossler and Michael Gellerman, just two of the 93 guys chasing Romo and a weekend tee time.