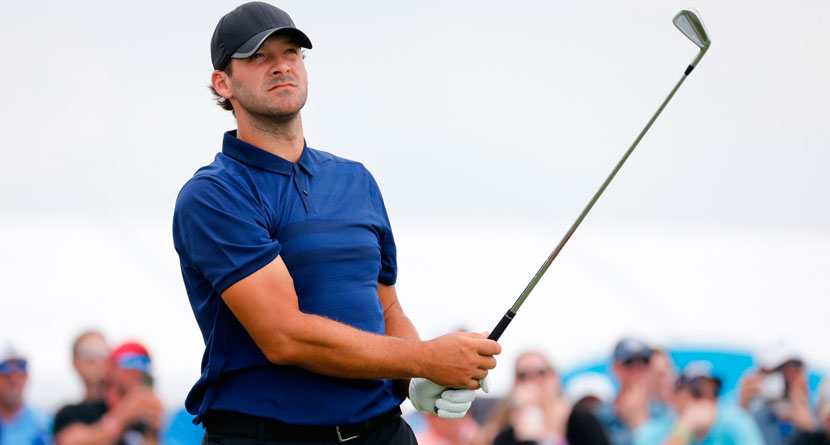 The PGA Tour made a pretty extensive overhaul of its schedule in 2019 to accommodate for college and pro football taking over the national sports consciousness from September onward, but as we near October, the biggest story in golf is a former NFL quarterback.

Playing in his fourth career PGA Tour event, former Dallas Cowboys quarterback Tony Romo got off to an incredible start in the first round of the 2019 Safeway Open at Silverado Resort and Spa shooting a 2-under par 70 to put himself comfortably inside the top-65 that would play the weekend.

Causing his bosses at CBS to consider a back-up plan should their top color analyst not be available to commentate a game on Sunday, Romo failed to replicate his first-round performance en route to a 6-over par second round 78 that left him outside the cut line.

“I got off to a rough start. A little bit of that I can attribute to nerves,” Romo said. “I came back strong with a couple of birdies and got myself back into it, but then I had a loose swing that just kind of made it difficult to self-correct on the course. Kind of got it a little bit late.”

Romo parred the first hole of the round, then strung together eight holes of par-less golf, which netted out to 4-over par 40 on the front nine. Needing to shoot even par for the 36-holes, Romo was behind the 8-ball when he made the turn. He dropped three more shots — offset by one birdie — on the back to post 78.

Despite boarding a plane destined for Chicago from Sunday’s Bears-Vikings match up, Romo was encouraged by his play in Napa.

While it’s become a cliche to hear Tour pros say they need to put four good rounds together to win a tournament, for Romo, he needed to start by putting one good round together, which he did.

“There’s no question that I’ve improved a lot,” Romo said. “I think today obviously didn’t show it as much, but I think just being able to do it one day, you need to do that at least to start. Then you start to get more comfortable in the environments each time.”

As for the tournament proper, Bryson DeChambeau shot a second-round 8-under par 64 to take the halfway point lead over Nick Watney.