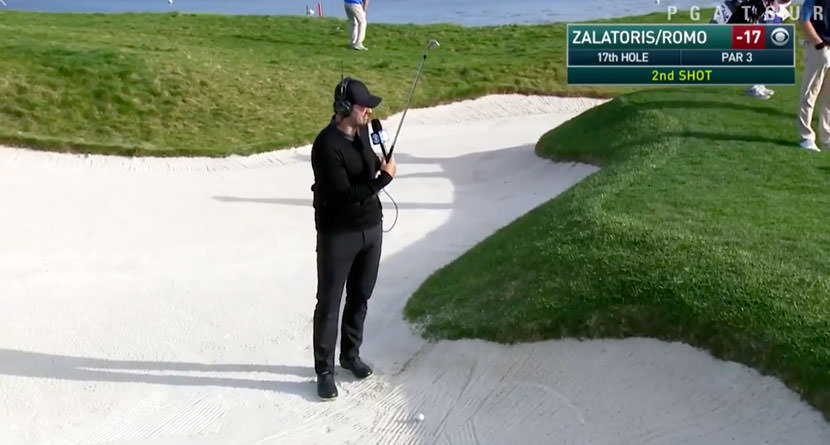 Tony Romo was one of the great quarterback rises in recent NFL history. An undrafted free agent out of Eastern Illinois, Romo went on to a Pro Bowl career with the Dallas Cowboys before retiring last year and joining CBS as its lead football play-by-play announcer.

Now, he’s trying to make another out of nowhere jump in a professional sport – golf.

As we all know, Romo has also dabbled on the golf course with appearances at the Pebble Beach Pro-Am and attempting to qualify for the U.S. Open. This week he takes a major step making his debut as a pro golfer playing at the Corales Puntacana Resort & Club Championship in the Dominican Republic.

Romo, who has a +0.3 handicap, will join Dru Love – the son of Davis Love III – and also Denny McCarthy for the first 36 holes.

Romo, who has done analyst work on the golf course for CBS Sports after the football season, is at 15-to-1 odds to make the cut at the old Web.com spot. He is the star of a series of prop bets and Vegas isn’t giving Romo much of chance. The O/U on how many players he beats is 2.5 of the 132 pro golfers scheduled to start. On the money line, Romo is +900 to make the cut while there are bets on what he will score on the first hole and what is score will be, with an O/U of 80.5.

Romo visited with the media on Tuesday in the Dominican Republic, with golf writer Adam Hurley snagging a photo of his bag. Per Golf Digest, Romo is playing with Callaway’s Rogue driver with a 9 degrees lofty and a Rogue 3-wood at 13.5 degrees. He will have Mizuno MP-18 MMC model irons and will rip out a new Odyssey Toulon Austin putter this week.

Here’s a close-up of Tony Romo’s bag (I feel like @jonathanrwall) pic.twitter.com/a7R8O9MVh9

There have been other sports stars who have dabbled in golf in the past. Last year, Golden State Warriors star Stephen Curry competed in the Ellie Mae Classic and finished 11 strokes off the cut line and ahead of only two other players. Romo struggled the first time he was at an event, shooting an 81 at the Northern Texas Players Tour last month and withdrew after shooting and 81 on the first day. The field in the Dominican Republic includes John Daly, Angel Cabrerea, Jim Furyk, and Retief Goosen as well as Love III and his son.

Update: Romo carded a 77 in his first round on the PGA Tour and is two shots out of last place. He has a 1 p.m. start on Friday.