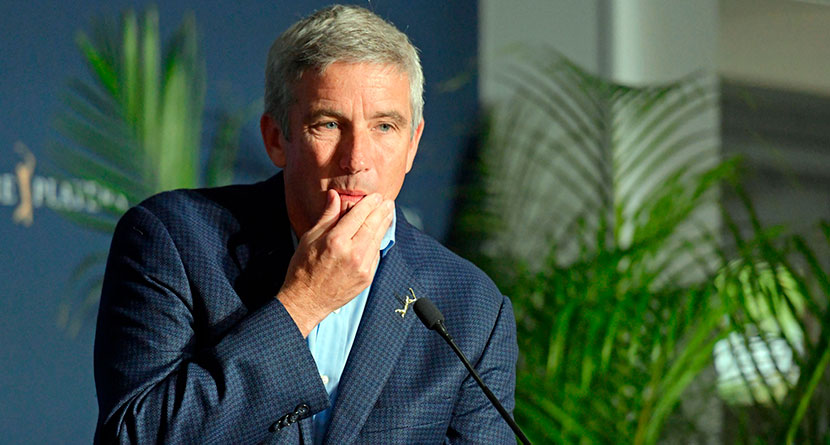 The PGA Tour made official its resumption of play slated for mid-June, corroborating this week’s Golf Digest report that the Tour was eyeing a June 11 restart at the Charles Schwab Challenge.

Although it continues to work on an uncertain timeline with regard to the coronavirus pandemic, the Tour’s brass felt confident enough in the direction the country and world is heading to release a 14-tournament schedule that would run from the second week of June to the first week of September.

Adding the 14 tournaments to the already-completed 22-event schedule, a 36-event season was deemed satisfactory by the Tour and it announced that a FedEx Cup champion would be crowned should all go according to plan.

I love that the @pgatour put something out there. If it happens or not is an unknown since everyone’s safety remains the top priority, but to have them put the effort to show us a plan is great. I’d rather have something to look forward to, understanding it may change than look back and say, “Wow I wish we would have had a plan if things got better”. So for the Tour to do this is awesome in my eyes. Understandably, people will disagree with that and think we have a lot of work to do to get there. Hats off to the entire PGA Tour staff and board members who have worked tirelessly in getting so many things done behind the scenes. I look forward to the opportunity to play golf for the fans again in a safe environment. Until then, take care everyone ? ?

“The health and safety of all associated with the PGA Tour and our global community continues to be our No. 1 priority, and our hope is to play a role – responsibly – in the world’s return to enjoying the things we love,” Commissioner Jay Monahan said. “Today’s announcement is another positive step for our fans and players as we look toward the future, but as we’ve stressed on several occasions, we will resume competition only when – working closely with our tournaments, partners and communities – it is considered safe to do so under the guidance of the leading public health authorities.”

While the first four events are expected to be contested without fans. When fans will return, among other major considerations are still yet to be decided upon.

With just under 60 days until the first tee shots are planned to be struck at Colonial Country Club, here are five questions the Tour was asked, and attempted to answer, on a conference call on Thursday.

“I would just say that we have a level of confidence that is based upon what we see,” Andy Prazder, PGA Tour Chief Tournament and Competitions Officer, said. “We see changes and developments being made in the world of testing, available tests. We’re following very closely through the assistance of our expert medical advisors the development of more large-scale testing capabilities, more rapid-response type tests, whether it’s through finger pricks, testing for antibodies.

“We obviously are aware that the FDA recently approved use of a saliva-based test. It gives us confidence that we will be able to develop a strong testing protocol that will mitigate risk as much as we possibly can. We know that there will also be further developments over the next eight weeks before we were to resume play.

“So we’re optimistic, but I’m not going to say on this call that I have 110 percent certainty, but we are very confident that we will be able to play that second week in June.”

2. Will players scattered around the world be able to make it to the events?

“We are aware that we have at a minimum right now 25 players who are somewhere outside of the United States,” Prazder said. “We are also aware that there are at least 35 caddies who live outside the United States that are subject to these international travel restrictions, and we are paying very close attention to if and when those restrictions are changed.

To a question regarding eligibility and what happens if we are able to play, does it provide enough of a season for eligibility purposes and so forth, I would say that if we ultimately end up making a decision that eligibility should span this season or next season, a factor in determining the answer to that question could be and will be what’s the effect of all this on our international members.

“I don’t have a specific answer beyond those points to share at this time.”

“We have our team that is overseeing all the tournaments, evaluating that question and a host of other questions as part of a risk analysis that we do for every tournament,” he said. “Travel, border closures as an example, is one component of many that stand, regulatory things across federal, state, local levels and a host of other questions. So we’re evaluating that on a tournament-by-tournament basis and obviously across the resumption of the Tour season, as well.”

3. What about players who don’t feel comfortable playing or don’t want to risk playing?

“That’s a question I think you need to direct to individual players,” Prazder said. “My only experience with anything like this I guess would be the first few tournaments following 9/11. We had players that were uneasy about air travel. That’s one of the beauties of being a PGA TOUR member; you’re an independent contractor. You’re not required to be at any PGA TOUR event. So they have that discretion to play tournaments where they favor the golf course or tournaments in this instance, to your question, they may or may not feel comfortable. But that’s an individual player decision.

“So I would direct you to reach out to some of the players that you know to get their direct perspective. I can’t speak on their behalf as it relates to that.”

4. What role will virus testing have in this resumption of play?

“We’re spending a lot of time right now learning about testing,” Dennis said. “I want to be perfectly clear that first and foremost, the situation at the moment with testing is that it’s most critical across the healthcare world and in our communities, and so at this juncture, we are merely evaluating it in the sports world and certainly at the PGA Tour.

“Our understanding is that as it becomes more widely available, it would be appropriate to be able to use that to help us return. We think that that’s critical for a lot of different reasons but certainly for the communities we play in and the 3,000-plus charities that we support. So we’re in an evaluation mode learning about the testing, building out what we think could work from a testing protocol, and we’ll certainly have more information on that over the next couple weeks and months.

“I won’t talk now about all the other constituents, but as it relates to players, we’re thinking of it as one would work through a normal week, and it probably starts with some kind of testing before you leave home in an effort to be as safe as possible, and then proper hygiene and travel protocols as you travel towards the venue, possibly then testing that would go on in a safe and as clean an environment as we can make, both in terms of what you’re doing in your daily routine at the golf course but also at the host hotel and dinners and all that. So it’s all wrapped up in there, and that question is not something I can answer yet, but it’s something we’re evaluating closely.”

5. Will there be adjustments made to the course?

“We’ve mapped out and are still in the process of finalizing what that day looks like, because we know that golf can be played in a safe way that abides by social distancing guidelines, and we’re seeing that in many spaces across the country, by the way, at the amateur level,” Dennis said. “But we can apply some of those same principles to golf on the PGA Tour.

“So anyway, from the driving range to the first tee, all kinds of little details, scorecards and bunker rakes and flagsticks and how we can make sure all that is done in a socially distanced way and make sure that things stay safe and clean and sanitized. So there’s a big project going on to think about those details, and as we get closer, we’ll certainly share with you guys those details of how that day would look.

“But in general, I think that the daily life of a PGA TOUR golfer and his caddie won’t be tremendously different. We’re just going to have to have some nuances to relate to social distancing and safe sanitation practices.”

You can read the full transcript of the Tour’s conference call here.