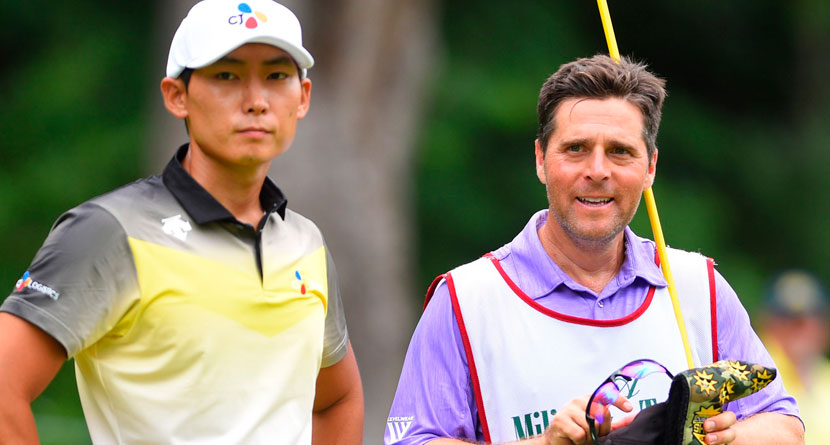 Editor’s note: Throughout 2019, our content partners at The Caddie Network will have caddies reflect on their respective paths to the highest level of their profession. Here, Mike Darby — caddie for Jim Herman — pens his firsthand account of what it took for him to land a bag on the PGA Tour as well as what he’s dealt with along the way.

I love that opening line. I hope to meet Jim Nantz one day. This is my story — with a twist — so bear with me here.

I grew up in Richmond, BC, Canada. I played hockey, baseball and tennis (NOT golf). Like most after high school, I had no idea what to do with my life, so I went back to school. I attended BCIT (British Columbia Institute of Technology) for its two-year Marketing and Small Business program. I figured it couldn’t hurt.

My grandpa was a golf nut and forced me to play with him on Saturdays. I hated it, but loved my grandpa… Then, I fell in love with it. I obsessed about it. I learned as much as I could about the sport and began competing in amateur tournaments. I immersed myself in the game working for Dave Esplen at the Richmond Country Club. I then joined Marine Drive Country Club as an intermediate member because that’s where champions played. I was coached by Glenn Butler and had a few successes, but many soul-crushing defeats. I desperately wanted to be a pro golfer. I was a perfectionist and golf was my identity. The hard, cold fact was I knew deep down I wasn’t good enough (a 2-handicap at my best?).

One year, I failed miserably at qualifying for the BC Amateur, but my friend Steve Frier got in. He asked me to caddie for him as it was being held at my old home course, the Richmond Country Club. My first thought was, “I want to play, NOT caddie,”

I did it anyway and had an epiphany.

I enjoyed caddying much more than actually hitting the shots. I felt no pressure yet experienced the adrenaline of competition. This was my “hinge moment.” I knew I could get to the tour this way. You see friends, sometimes when you fail to reach your dream your destiny is revealed. That is way too deep for me, but it’s true. Later that summer, Steve qualified for the Canadian Tour event held at Mayfair Lakes in my hometown. I caddied for him there as well, and the quest had begun.

Starting out was difficult to say the least. In the winter of 2005, I had to borrow money from my little brother Cody to buy Christmas presents for my family and girlfriend at the time. That was a LOW point. I worked the next few summer seasons on the Canadian Tour (2005-2007) caddying for various players. I learned how to travel and forged some of the friendships I still have to this day. I also got to experience my first tour win with Brian Guetz at the 2006 Barton Creek Classic in Austin, Texas.

We all roamed the hallways of that resort and helped ourselves to the conference buffets and anything we could get our hands on. We were broke. The resort promptly invited us to never return.

2008 was my first year in the USA on the then Nationwide Tour. I worked with Brian’s younger brother, Bret Guetz, until I experienced my first firing towards the end of the year. As always, it turned out to be a blessing in disguise as it allowed me to approach D.A. Points. We finished 14th in Chattanooga then won our second event together in Miami. Out of nowhere, straight to the PGA Tour.

We started off 2009 well with two top 10s and two top-25 finishes. I was fired the week of Quail Hollow in the spring but was happy to make it past the west coast. I was a rookie and didn’t know the courses or the ins and outs of the PGA Tour yet.

It was back to the Nationwide Tour to finish the season with my good friend Brad Fritsch, a fellow Canadian.

We got off to a nice start with a top 10 in Kansas but did not retain full status for 2010.

2010 was my worst year on tour in terms of results, but one of the best lessons in life. I worked the whole season with Canadian Barrett Jarosch. A phenomenal human being and a great working environment, but we simply did not get the results. At the end of the year I found myself broke, living in a barn on my parents’ property, and wanting to quit (that really attracts the ladies by the way). Some encouraging advice from family, friends and a fellow BCIT grad convinced me to keep going.

From 2011-2013, I bounced around between the Web.com and PGA Tour again working with some great players and learning incredible life lessons. I had the pleasure of working with Richard H. Lee, Adam Hadwin, David Mathis, James Hahn and David Lingmerth.

The upward ascent started when I began working with Canadian Nick Taylor on the Web.com Tour in the summer of 2014. We quickly had some success and secured his PGA Tour card for 2015 with a sizzling, final-round 63 at the Web.com Tour Championship.

We wasted no time starting the 2015 season by winning our fourth start, the Sanderson Farms Championship in Jackson, Mississippi. This was my first PGA Tour win; my dream was finally achieved. All the blood, sweat and tears were finally worth it. We had “made it.”

We had an up and down year but finished the 2015 season 101st in the FedExCup standings.

Then I was fired.

Anxiety and anger erupted inside of me. I was irritable and difficult to be around. This was the lowest point and the biggest failure of my career. BUT it forced me to have a hard look at what I was doing. Like any relationship that breaks down it all comes down to communication. I didn’t speak up many times that I should have, and I opened my big mouth many times that I should have shut up. Valuable lesson learned.

I met up with Points again at a Monday qualifier where I was working for Mathis. D.A. asked me what my plans were for the season and then we reconciled for our second marriage. We had an up and down year but were able to get his PGA Tour card back at the Web.com playoffs. Validation came when we won the Puerto Rico Open in the spring of 2017. This was my second PGA Tour win and our second win together. The hard changes I had to make were slowly paying off. D.A. and I parted ways at the end of the 2017 season after a string of poor results. It was a good run.

I started working with Whee Kim in the summer of 2018. We had a chance to win the Canadian Open (finished T2), and Mayakoba, Mexico (T10). We were in the final group with Matt Kuchar that week in Mexico when that whole controversy occurred.

A mud ball on the final hole of the John Deere Classic cost us a third top-10 finish. After seven missed cuts in a row, I ended our working relationship after the Genesis Open in February 2019.

The 2019 season has been a difficult one for me personally and professionally. I worked the Dominican tournament with John Rollins, three with Brad Fritsch on the Korn Ferry Tour, and the Canadian Open with Tyrone Van Aswegen. I had not made a cut since November 2018. The financial and personal pressure started to mount. In July, I heard that Jim Herman was going to need someone to finish the season with. I texted him immediately and he fortunately said yes.

We narrowly missed our first cut together at the John Deere Classic — my 12th missed cut in a row. Divine intervention happened the next week at the Barbasol Championship. Nothing in terms of stats or results pointed to our victory there, it was just incredible. It was my third PGA Tour win and Jim’s second. We ended our 2019 season in Reno with a T51 finish. We were exhausted mentally and physically. It was time to shut it down until the fall series.

Many times, I have thought about taking my own life. How’s that for a twist?

I have never mentioned this to anyone, no one, ever, not once. Big mistake. The key word is “THOUGHT.”

I know that suicide is the most selfish act a human being could do. I’ve seen the devastation it leaves behind for family, friends and anyone that has met the individual. I’m known as the happy, positive, thankful guy on tour – basically, the Peter Malnati of caddies.

Now you know I had a dark side.

And I just want to make clear that these thoughts are in the past. I’m very thankful to be where I’m at. Those thoughts came during my lowest points. I’m not suffering with these thoughts now, nor do I struggle with them on a day to day basis.

I’ve had so many low points along the way, but they are all the result of my choices. My biggest regret is not talking to someone. I internalized it all and have spent many sleepless nights in worry and with anxiety. The thing is, 99 percent of what we worry about never takes place. I learned that, for me, between 2-5 a.m. is when the negative thoughts occur. I’m tired and my blood sugar is low, a great time to experience those thoughts. Here’s what has gotten me through this:

My goal of this piece was not to list accomplishments. It was to reach just one person who may be struggling mentally right now. Life is a series of peaks and valleys. If you find yourself in one of those inevitable valleys, PLEASE do not do what I did. Talk to a friend or family member. If you’re not comfortable with that, talk to an unbiased third party like a counselor. There are so many resources available today with a simple search. No one gets there alone.

Here’s to the journey ahead and those of you I will meet.

Thank you and goodnight.

If you or someone you know may be struggling with suicidal thoughts, you can call the U.S. National Suicide Prevention Lifeline at 800-273-TALK (8255) any time day or night, or chat online.