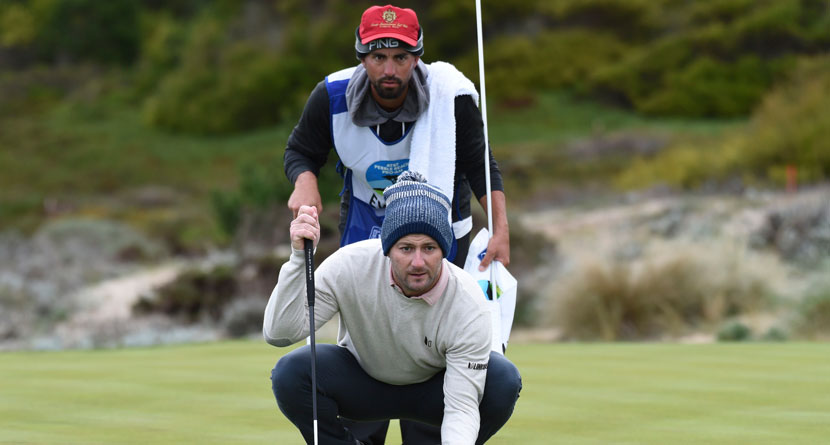 PGA Tour caddies, by and large, are pretty solid golfers in their own right. Many played at a high level in college and some even tried out the professional ranks before settling for a slightly different life on Tour.

Trey Bilardello, the 33-year-old looper for PGA Tour winner Matt Every, is one of those solid players, and since he has maintained his amateur status and carries a 2.2 handicap index, he opted to compete in last week’s U.S. Amateur local qualifier at Mayacoo Lakes Golf Club with hopes of earning a spot at Pinehurst later this summer.


Those hopes of advancing out of the qualifier lasted a little more than two holes, however, as Bilardello ended up shooting a 131-over par 202.

A tweet from Korn Ferry Tour player Justin Hueber alerted the larger golf public of the score, which was originally reported to be just a 194. However, after some digging by GolfDigest.com’s Joel Beall and Stephen Hennessey and GolfChannel.com’s Brentley Romine, it was determined that not only did he fire in the 200s, he did so on purpose.

No, this tour caddie didn’t shoot 194 in a U.S. Am qualifier. He shot 202—then was DQ’d for serious misconduct https://t.co/vjWYBs3ud4 via @GolfDigest

“I’ve never seen anything like it before,” Bilardello’s playing partner, La Salle University freshman Kristian Fortis, said. “It was quite an experience. He just started off like normal. He was actually not a bad golfer, and he hit some nice shots. He had two pars, and then it started to go a little downhill.

“After the first nine, he said that he wanted to shoot the highest recorded score in USGA history. He just did not care. He was really rude to a lot of the officials, too. Something was off.”

This story is incredible – and not in a good way. Totally against the spirit of the game, and unfair for Kristian Fortis to have to play with this guy. An apology to Kristian and everyone in the field is needed. https://t.co/Kb0lIhIhTi

Bilardello would sign for his 202, but Darin Green, director of rules & competitions for the Florida State Golf Association, told GolfDigest.com that it only appeared to be a 194 because of a glitch on in scoring system that didn’t allow scores to be posted over a 19.

Shortly after the signed scorecard was accepted, Green and the FSGA consulted with the USGA and disqualified Bilardello under Rule 1.2 for serious misconduct and failing to play in the spirit of the game.

“The Florida State Golf Association, after consulting with the United States Golf Association, has disqualified Trey Bilardello under Rule 1.2 for serious misconduct and failing to play in the spirit of the game,” Beth Major, USGA senior director of championship communications, told GolfDigest.com. “His disqualification was deemed appropriate as a result of the individual’s failure to show consideration for other players—deliberately playing away from the hole to run up his score.”