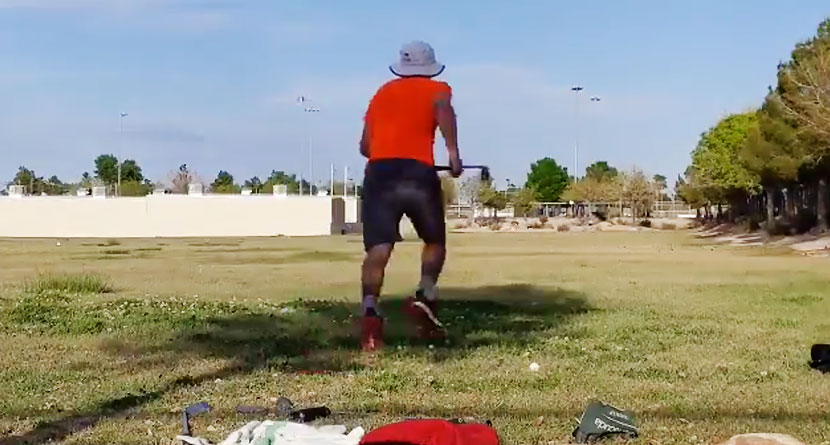 Tour pro and former UNLV golfer Eddie Olson is among the lucky golfers in the country who not only is allowed to play golf during the coronavirus pandemic, but also compete for some sort of sustenance on Arizona mini-tours.

However, while playing and competing under social distancing and other health restrictions is a nice distraction for many recreational golfers, a solid and consistent practice regiment is required for guys like Olson who are attempting to play for their living.


Ever inventive, Olson has taken to bringing balls and an umbrella to a local park and hitting balls towards his opened umbrella some 100 yards away to recreate a normal practice session. Yet, last week, Olson had a session disrupted by a would-be thief.

Eddie Olson who lost in playoff today, had only been able to practice at a park leading up to event. He would place his umbrella at 100 yds to hit at. And while he was filming his swing….someone jumped fence and tried to steal his umbrella and he had to run them down..??? pic.twitter.com/1N57Lz8tRu

Ryan French of the Twitter account Monday Q Info shared a video Olson took to presumably diagnose some swing mechanics when off in the distance you can see Olson’s umbrella begin to move.

Realizing that he was in the midst of some kind of robbery as he pulled another ball over, Olson began to yell and run at the assailant.

The umbrella-napper appears to stop and drop the umbrella before the video cuts off, salvaging Olson’s target and practice session, while also providing him with some adrenaline and cardio.