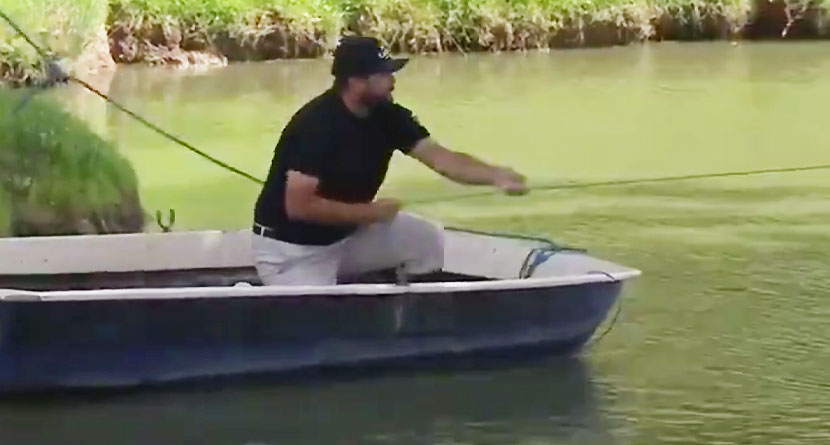 The 17th hole at Forest of Arden Country Club, the host of this past week’s European Tour’s Hero Open, is guarded by a penalty area to the right of the green in which Henderson’s Island sits, a small piece of shagging property only a few yards from the putting surface.

Swedish pro Joel Sjöholm was on the edge of contention heading into the final round, but a string of three bogeys in five holes on the back nine knocked him from near the top of the leaderboard.

At 10-under par for the tournament and playing the par-5 17th hole, Sjöholm blew his second shot into the par-5 well right and seemingly into the water, but the ball miraculously found land, albeit none that was connected to the hole he was playing.

After consulting with rules officials, Sjöholm was told he could play the ball as it lies if he could get to it.

Sjöholm hopped in a rickety row bow that was connected to the island by pull cables and made his way to the small piece of land, found his ball, moved some signs and played a shot back onto a larger piece of land.

Erm… Not sure how to caption this so we’ll just say what we see. Joel Sjöholm is currently in a boat to go and play his ball from an island 🚣‍♂️#HeroOpen #GolfForGood pic.twitter.com/PcS3vlhERr

UPDATE: Sjöholm is terrible at moving signs, but has played his ball from Henderson’s island and made bogey.#HeroOpen #GolfForGood pic.twitter.com/wtW8m9ysEY

You’ve done everything right so far Joel, so whatever you do, don’t fall in…#HeroOpen #GolfForGood pic.twitter.com/F7vPZTYvay

Sjöholm successfully navigated his way back to the mainland, chipped up and two-putted for a bogey six, which will surely go down as the best of the four he made on the back nine on Sunday.

This is the most @SwedishTORO video I’ve ever seen 😂 https://t.co/OmMqeHkqyP

Sjöholm finished the round at 1-over par for the day and tied for 22nd place.