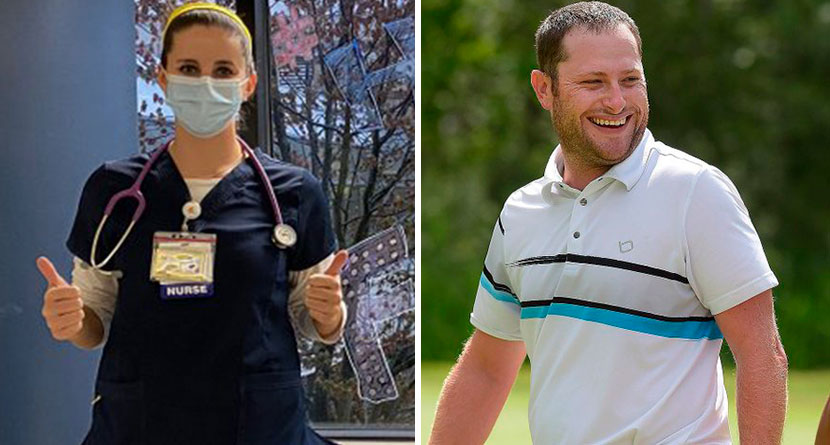 The COVID-19 pandemic has caused a lot of hurt and suffering for people around the world, and not just in a medical sense.

Unemployment rates in the United States are as high as 22% of the working-age population, according to Reuters, and while that financial squeeze isn’t felt by the players at the very top of the game, others still trying to make their mark are finding alternative ways to earn a paycheck.

For Hoffman, she returned to her home state of Michigan to work as a nurse at the University of Michigan’s medical center, Michigan Medicine. Before turning pro four years ago, she worked in the orthopedic trauma unit, which is where she returned last month.

While she hasn’t dealt directly with a COVID-19 patient, she is prepared to.

“I decided I needed to come back to Michigan to help,” she told GolfChannel.com’s Randall Mell. “There’s some uncertainty and anxiety dealing with a novel virus, and that can be challenging. Yes, I worried about contracting COVID-19 myself, and I worried about passing that on to somebody else. I also worried about dealing with the acuity level of that kind of patient, a type of patient I had never cared for before.

“I had to overcome that, but that’s why I became a nurse. I wanted to help people in vulnerable states. I enjoy doing that for people.”

Helping people in a different way, Barnes took a job at a Publix grocery store near his home in Palmetto, Florida. With a family of four to provide for, Barnes works the early-morning shift at the store restocking shelves from 3 a.m. to 1 p.m.

“Something had to happen. There was just no other option,” Barnes told GolfChannel.com’s Will Gray. “I wasn’t raised as the kind of guy who’s going to look for a handout. That’s just not me. So I’m going to do it myself, because it’s my family and my responsibility.”

After his nine-hour shift, Barnes recoups for a few hours before heading to work on his other job, being a professional golfer.

“(After work), I’m basically a slug for a couple hours,” he said. “Then generally by around 3 or 3:30, I muster up the energy to get out to the golf course.

“I didn’t feel that what I was doing was anything special, it’s just what had to happen for my family. And I will continue to do the best thing for my family for the rest of my life.”