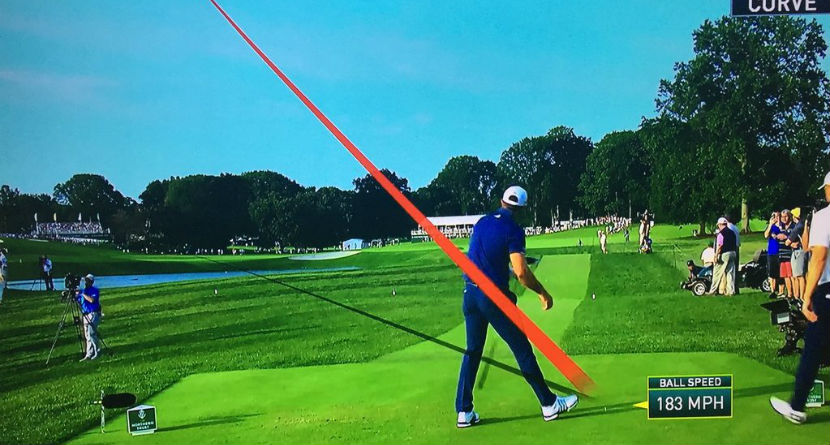 In case you haven’t heard by now, Dustin Johnson came from behind on Sunday to take down Jordan Spieth in a thrilling playoff to capture the first leg of the FedEx Cup Playoffs at The Northern Trust.

While nobody could deny the fact the line DJ took on his tee shot during the first hole of sudden death was bananas, some Tour pros questioned the choice to use the dogleg left par-4 18th hole at Glen Oaks Club to decide the winner.

After nearly coughing up the title in regulation after a poor drive forced a lay up, the current World No. 1 decided enough was enough and bombed one 341-yards over the water leaving himself with a flip lob wedge, which he stuck to three feet for the win. Easy game, right?

Has @DJohnsonPGA ever played a more perfect hole than that playoff birdie? pic.twitter.com/9gUOrTINTB

On the contrary, Speith played his drive out to the right into the middle of the fairway leaving 175 yards for his second shot. However, he failed to convert the putt to extend the match. Let the criticism begin!

Ian Poulter was one of those didn’t agree by calling the 18th “the worst hole on the golf course.”

Shame @Fedex playoff hole had to be on the worst hole of the golf course.. 18th hole suited 5 guys in the field. Congrats DJ unlucky Jordan pic.twitter.com/ms2WZrfq0X

Wesley Bryan shared the same sentiment calling it “a shame.”

Even the usually reserved Kevin Kisner expressed his displeasure.

However, Luke Donald decided to take a lighter, and slightly wetter, approach.

Just seen Dustin’s drive on 18 in the playoff, funnily enough that’s the same line I tried a couple of times – didn’t quite pan out #wet ????