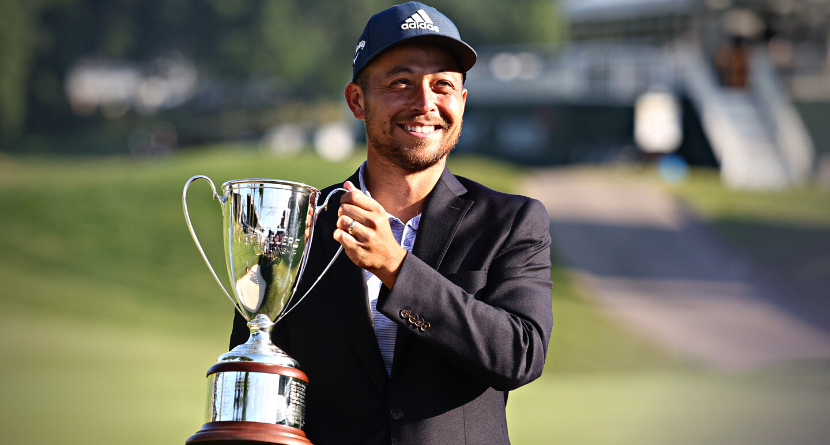 The 18th hole at TPC River Highlands is the least risky leg of a closing quartet that ranks among the PGA Tour’s best risk-reward finishes. Unlike the other three holes, water isn’t a threat. And over the years it has yielded its fair share of clinching birdies — from on the green or off.

But, of course, when a player’s guard is lowered, golf can lower the boom. And that’s a fate with which Sahith Theegala is becoming quite familiar.

Theegala, who suffered a wrenching defeat at the WM Phoenix Open earlier this season, came to the 72nd hole with a 1-shot lead in the Travelers Championship on Sunday. His tee shot found the lip of a fairway bunker and he proceeded to make a double-bogey that all but assured Xander Schauffele of his sixth career Tour victory.

For his part, Schauffele, who converted a 54-hole lead or co-lead for the first time in five tries, closed with a birdie to post a winning score of 19-under 261, two shots clear of Theegala and J.T. Poston (17-under 263). Stanford standout Michael Thorbjornsen, who hails from nearby Wellesley, Mass., thrilled the New England galleries with a final-round 66 to finish in solo fourth at 15-under 265.

“I did everything I thought I had to do and it just happened to be everything bad culminated on one hole,” said Theegala, who carded a final-round 67. “I did so much good. I didn’t really even have to scramble much today. I don’t think there’s anything I’m going to be doing differently. Just going to keep sticking to my process and loving every moment of it and, yeah, just keep it going from there.”

Theegala, 24, had seized the lead with a rare birdie on the par-4 17th hole. When his drive settled near the lip of the fairway bunker, he and his caddie began a long deliberation before settling on a strategy. But Theegala’s mighty lash hardly moved the ball. He finally escaped the predicament with his third shot and hit his fourth to within 10 feet, but his bogey effort ultimately lipped out.

Watching this unfold from the 18th tee box, Schauffele — who was playing with his close friend, Patrick Cantlay — stayed aggressive.

“My mind was telling me to hit a good drive and then use your sand wedge or lob wedge in there and make birdie,” said Schauffele, who closed with a 2-under 68. “To sit there and watch what happened was a bit of a shock, obviously. I really had to try and focus on the task at hand.”

Earlier this week, Schauffele, 28, put rumors of an impending LIV departure to rest in a radio interview, pledging to help commissioner Jay Monahan, Rory McIlroy and the rest of the Tour loyalists retain the top players in the world.

“Yeah I’m here,” Schauffele said. “I met with Jay, we had a player meeting today. I met with Jay myself yesterday and I see myself right now trying to find a way to keep guys on the Tour versus being one to bail.”