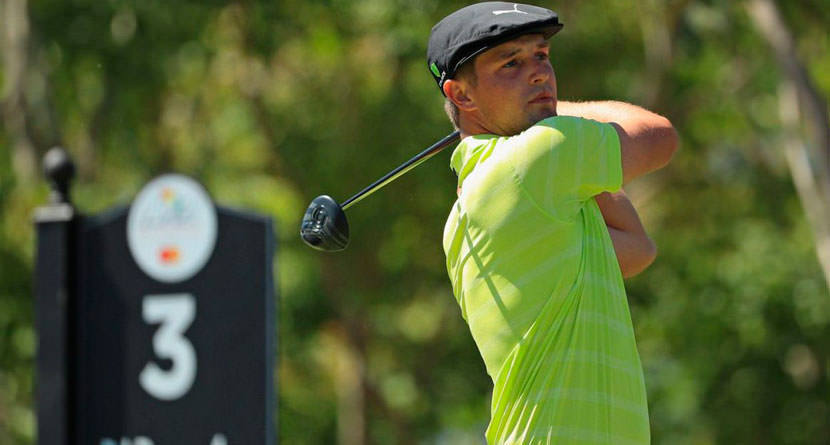 Bryson DeChambeau sat atop a crowded leaderboard through two rounds at the RBC Heritage at Harbour Town Golf Links on Hilton Head Island, South Carolina. Prior to going out for his third round, DeChambeau told CBS that he wanted to “attack the golf course” because there are so many good players near the top of the leaderboard, he felt he needed to play aggressively.

On the first hole, the former NCAA Individual and U.S. Amateur Champion did as he predicted bombing a drive 307 yards down the center and knocking his 97-yard-approach shot to 16 feet from the cup. DeChambeau knocked in the birdie putt and headed to the par-5 second hole, statistically the second-easiest hole on the course this week playing nearly a half of a stroke under par.

DeChambeau Uses Fan as a Backboard on Par-3

That’s when disaster struck and flurries fell in South Carolina.

DeChambeau’s overly aggressive second shot went out of bounds and he compounded his mistake by hitting his fifth shot into the front greenside bunker. A blast out to five feet and a missed putt later, DeChambeau drew a snowman 8 on the scorecard.

Ever the grinder, DeChambeau was able to get his round back to even par for the day by the 11th hole. However, more trouble lurked around the Pete Dye-designed Harbour Town for Bryson. After getting back to 10-under par for the tournament and even on his round, he double bogeyed two of the final six holes to shoot 4-over par 75 and drop to 6-under par for the event.

DeChambeau will enter the final round seven shots behind 54-hole leader Ian Poulter.

Poulter is currently at 13-under. He is coming off a win at the Houston Open and a 44th-place finish at The Masters. Poulter has not had a bogey in his last 45 holes.

“I’m counting the bogey-free holes, it’s just nice to play good golf, continued form from Houston,” Poulter said. “Kind of mustered up a bit more energy to go again tomorrow. And see if we can have a last bit of plaid to put in the closet.

“It’s been a long six weeks. I don’t normally play six in a row. But the way the schedule panned out, I pushed to get into Augusta, doing that just it was meant to be.”

Sunday’s final round will be moved up to 7 a.m. tee times with threesomes going off on No. 1 and No. 10 due to expected rain later in the afternoon. World No. 1 Dustin Johnson is 10 strokes off the pace.

Poulter tees off at 9 a.m. with Luke List and Si Wood Kim, who are both one shot back.