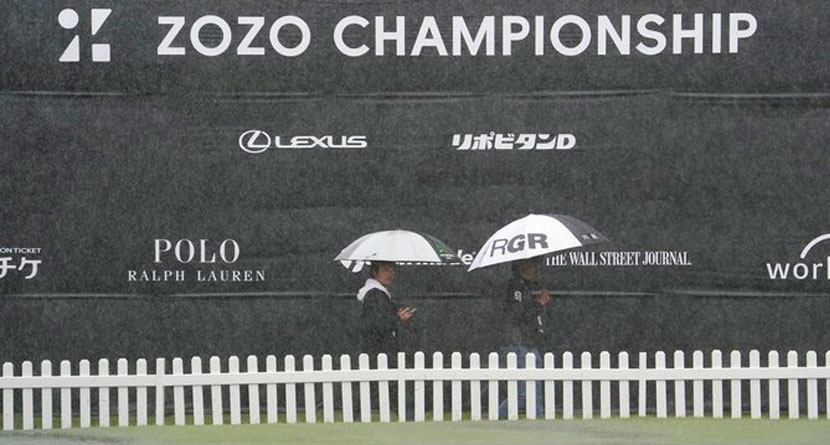 Golf fans got an unexpected extra day of prognosticating how the latest iteration of Tiger Woods would handle a first-round co-lead as the PGA Tour announced early on Friday morning in Japan that the day’s action would be washed out by torrential rain brought by Typhoon Bualoi.

After extended periods of rain through the night, the call was made at 6:30 a.m. local time to postpone the second round.

“The golf course has already taken on 4/10s of an inch of rain, so it has actually reached the point of saturation and it’s become unplayable,” PGA Tour vice president of Rules and Competitions Gary Young said. “With more rain in the forecast and three to five inches of rain for the day, we thought the right decision was to call play for the day.”

Current view in Chiba, Japan, down the road from the Zozo Championship venue… pic.twitter.com/oFCuOmFPog

The plan, which seemed like a no-brainer, soon had the requisite social media posts to buffer the decision. Ian Poulter, who fired an opening-round 71 to sit seven shots back of Woods and Gary Woodland’s co-lead, shared a video of water rushing throughout Accordia Golf Narashino Country Club.

Golf course has received a staggering amount of rain today.. Under this water is the 10th fairway somewhere. You can see the green in the top of the picture. This course drains incredibly well and will be ready for us tomorrow, tee times are now between 9.30-11.30 Sorry to the fans that didn’t get to see any golf today and travelled to the course. However we will now be using Monday to finish. ??

“Golf course has received a staggering amount of rain today,” Poulter captioned the video. “Under this water is the 10th fairway somewhere. You can see the green in the top of the picture. This course drains incredibly well and will be ready for us tomorrow, tee times are now between 9:30-11:30.”

Poulter broke a bit of news with his post as it went out four hours before the official news from the PGA Tour came that said there would be a two-hour delay to the second-round starting times and that a Monday finish had already been decided upon.

PGA Tour Communications sent out a tweet saying that more than six inches of rain had fallen on the course and as a result, spectators would be prohibited from being on the grounds on Saturday with a Monday finish assured.

Just announced: The @zozochamp will now finish on Monday, and will be closed to spectators on Saturday. pic.twitter.com/OOkWPXkAeO

The unexpected day off resulted in players around Chiba to find something to do for an entire day. As Justin Thomas pointed out, the life of a PGA Tour player isn’t always so glamorous.

What a day for the books… got back to hotel, got treatment, had lunch, worked out, stretched, showered, movie, stuck at movie theatre because of floods, walked to dominoes with the guys, made our way home 2 hours later, treatment again, now back in my hotel room #PGATourLife

An updated viewing schedule was announced by Golf Channel on Thursday evening, extending coverage on Friday and Saturday night in the United States.

Updated @GolfChannel TV schedule for the #ZozoChampionship (all times Eastern):