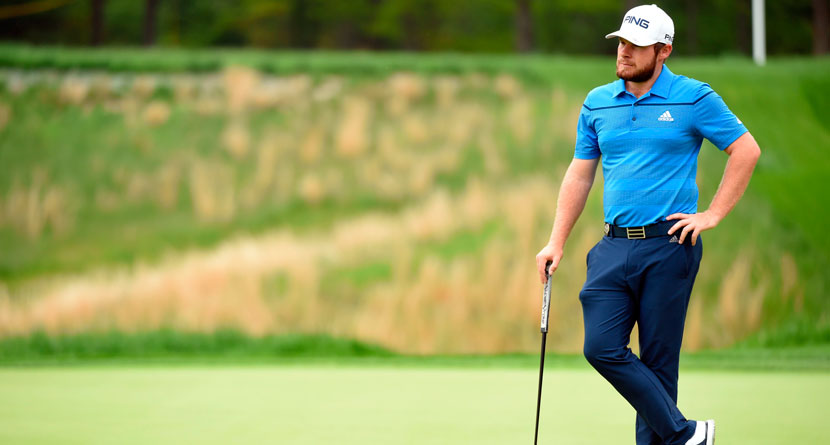 Tyrrell Hatton is one of the most combustible players in professional golf at the moment, possessing a fiery temperament that could turn sour in the wrong situation.

On Friday at the Italian Open, an incident with a fan that could have been bothersome to the Englishman in other circumstances resulted in a funny exchange between Hatton, a European Tour cameraman and his fiancée, Emily Braisher.

Readying himself to play his approach shot into the par-4 11th hole at Olgiata Golf Club, Hatton was spooked off his ball when he heard a noise to the right of the fairway. Letting out an amused chuckle, Hatton looked towards the offender as they closed the door to a portable toilet and asked, “Is that you? What are you doing?”

Then, turning to the cameraman in the fairway behind him, Hatton outed the guilty party as his fiancée, Braisher.

“You put me off!” Hatton continued. “You should be ashamed.”

Hatton regrouped and hit his approach to about six feet for birdie.

Although he missed the putt, Hatton put together a 2-under par round that moved him into a tie for 12th as of this writing. After the round, Hatton tweeted sarcastically “#weddingsoff #toiletgate” with a few laughing emojis.

A European Tour official showed Hatton the video after he finished, allowing him to get another laugh at his fiancée’s expense.