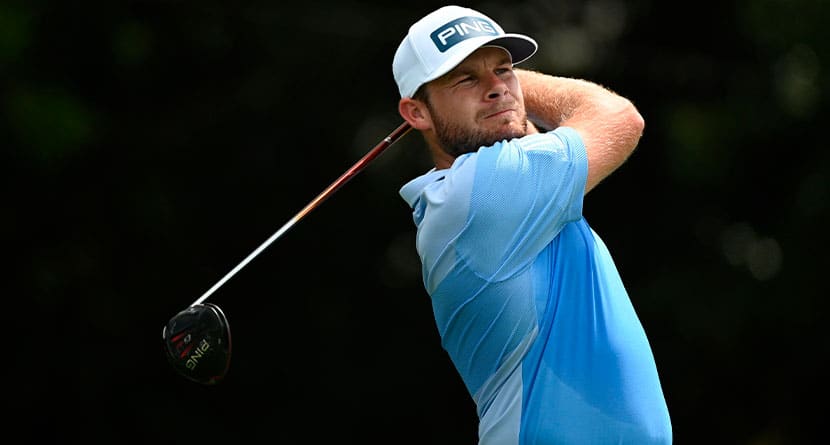 Tyrrell Hatton has had quite the fortnight.

Over the past two weeks, Hatton won arguably the biggest tournament of his career at the BMW PGA Championship at Wentworth, his fifth win on the European Tour and third Rolex Series event, and then flew some 14 hours across eight time zones to Las Vegas to compete in this week’s CJ Cup @ Shadow Creek.

Admittedly and understandably jet-lagged, Hatton took the first-round lead with a 7-under par 65.

“It’s fair to say I’m pretty tired at the moment, still struggling a little bit with jetlag,” Hatton said after his opening round. “The issue today, I was grumpy out there, I was quite agitated. Even though I had a really good score going, I was just on edge. That’s generally quite a hard thing for me to manage.

“I mean, Wentworth, I did a great job of that, I was quite happy all week. Today, being as tired as I was, I was just a bit more on edge. I wasn’t happy with kind of how I managed myself after some poor shots, but I think this is kind of easy when everyone loses their cool when they’re tired and haven’t slept enough.”

That admission may have been a bit of a harbinger of what was to come two days later when the scoring wasn’t going so well. A second-round 68 kept Hatton near the top of the leaderboard, but on Saturday, things weren’t falling his way and on the 421-yard, par-4 10th hole at Shadow Creek Golf Club, Hatton let off a bit of steam, albeit in a relatively subdued way.

Having made eight pars and a bogey, the field was moving away from the Englishman when he had a good look at the green from the center of the fairway. Instead, Hatton chunked it and before holstering the club, he tomahawk-threw it down the fairway.

⚾️ @TyrrellHatton getting in on the @MLB bat (or club) flip trend. pic.twitter.com/OMbBm9T6Oh

Before picking up the wedge, he gave it a quick kick as well before managing to salvage par with an 11-footer.

Hatton clawed his way to a 1-over par 73 to stay on the outskirts of contention. A Sunday 7-under par 65 put him in the conversation, and ended up earning him a T3 finish, with which he said he was pleased.

“Very happy with that round to finish the tournament,” he said. “Yesterday was a struggle, so it was nice to come out today and shoot a good score. My game’s in a good place at the moment. Winning last week, and obviously, it was a long travel time to get here, thankfully my game’s held up. We battled a bit of jetlag. To be honest, I felt fairly tired throughout the week and I’m really happy with how I’ve played. It’s still a great week to finish inside the top-5 on the PGA Tour.”

Hatton, who won the Arnold Palmer Invitational earlier this year, will play again this week at the Zozo Championship where he will hope to be better rested.