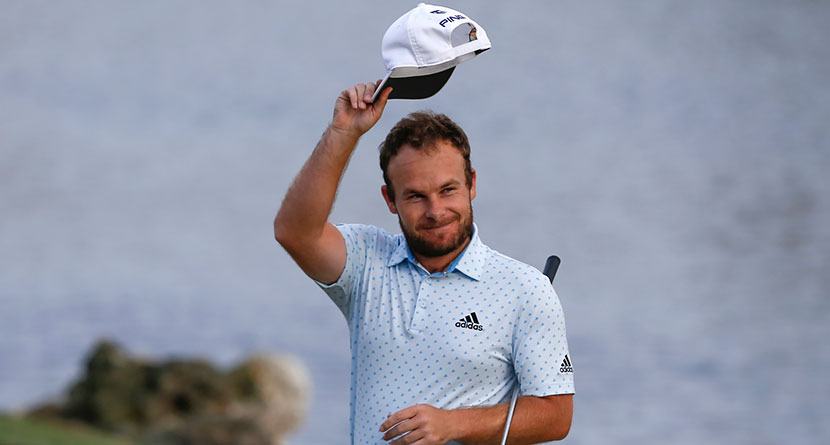 Tyrrell Hatton made a few promises in the afterglow of his Arnold Palmer Invitational victory on Sunday night, and by Wednesday afternoon, he was still feeling the repercussions of following through on those promises.

“It’s hard to kind of think about next week at the moment with the sort of potential celebrations we have got later today,” Hatton said after sinking the par putt to capture his first PGA Tour title. “I don’t think I’ll be in any fit state but, at least until Wednesday. But yeah, I think we’ll savor this one quite a bit.”

The multi-day hangover is a rite of passage after your first TOUR win, @TyrrellHatton. pic.twitter.com/9CFB1Fd08N

Hatton’s celebration came and went over the past 72 hours, and on Wednesday, he met with the media for a debrief still looking a bit worse for the wear.

“I’m still feeling… I’m still quite tired, to be honest,” Hatton responded to the first question of the presser. “But I was cuddling the toilet by 5:00 in the morning, so it was a good night.”

“I was cuddling the toilet by 5 in the morning” pic.twitter.com/RvbNEbiV0q

So what, exactly, goes into the celebration for one’s first PGA Tour victory? For Hatton, it started with a customary shot of Kettle One — Arnold Palmer’s vodka of choice — at Bay Hill, and fittingly enough, ended with more vodka later in the evening.

“Sunday night celebration, there was a lot of red wine and then, unfortunately, I think the finisher was the drinking the vodka and tequila out of the bottle, which never kind of ends well,” he said. “And, yeah, I fell victim of that, definitely.”

Tyrrell Hatton on his Sunday night celebration: “A lot of red wine… the finisher was drinking vodka and tequila out of the bottle… I fell victim of that.” pic.twitter.com/CobAl6SuEr

Hatton and his crew went to nearby Nona Blue, the bar-restaurant owned by fellow PGA Tour pro Graeme McDowell, according to GolfDigest.com’s Shane Ryan. From there, Hatton and his crew headed back to their rented house and kept the party going until the wee hours of the morning.

Faced with a big challenge this week at The Players Championship, Hatton allowed that his previous finishes at the course haven’t been great, but he hopes the form he brings into the week will lead to another good week.

“Unfortunately, it’s a tournament that I haven’t done too well at in the past, but I’m hoping that changes this week. Obviously, nice week last week and a few days to recover before we get going tomorrow,” Hatton said.

He’ll tee off on Thursday at TPC Sawgrass, hopefully fully rested, recovered and ready to go, alongside Max Homa and Paul Casey.