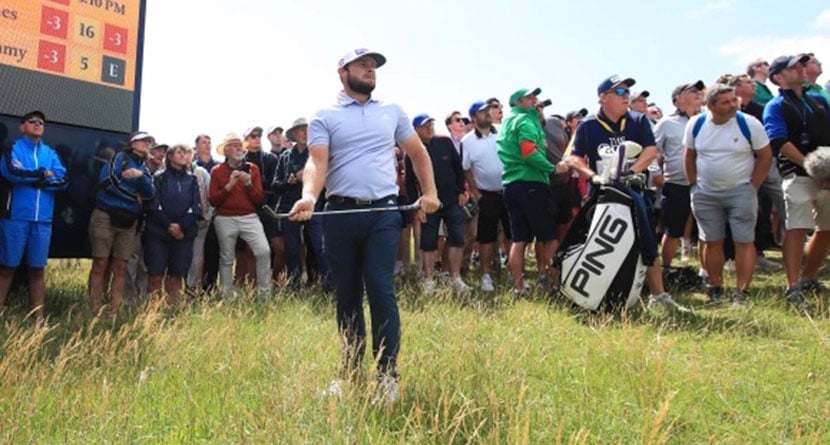 Collin Morikawa, for example, the winner of this past weekend’s Open Championship, is as stoic as they come on the course, while golfers like Jon Rahm and Jordan Spieth prefer to be a little more animated in their actions and reactions.

Still, there’s perhaps no better example of a heart-on-their-sleeve golfer than England’s Tyrrell Hatton. Ranked No. 10 in the world coming into the championship, Hatton’s antics on the course are often controversial, but as a self-described “angry golfer,” outwardly showing the fire burning inside is  how Hatton has found he plays his best golf.

On Friday at The Open, however, Hatton had a meltdown for the ages during the second round that led to a missed cut. Shooting an opening-round of 2-over par 72, Hatton needed a solid round to play the weekend, and he had nothing to complain about on the front nine that featured one birdie and one bogey.

After a birdie on the 10th hole, Hatton was squarely on the cutline. But then he made a mess of the par-3 11th hole, leaving himself 20 feet for bogey. Missing the putt, Hatton pointed to someone in the gallery and followed it up with a middle-finger salute.

Not everyone is a fan of the Open fans this week. Tyrrell Hatton gives the finger to somebody in the gallery. pic.twitter.com/LsIN1dsx6F

Tapping in for double bogey, Hatton wasn’t done with the fan in question, pointing them out with the butt-end of his putter and using some not-suitable-for-work language, he shared his thoughts on the matter.

Hot mics are picking up Tyrrell Hatton. The Open is officially underway. pic.twitter.com/6g7KuVR2SW

Hatton battled back, birdieing the par-4 12th and the par-5 14th to once again sit on the cutline. A bogey on the par-4 17th made a birdie at the home hole a must-have for Hatton to secure a weekend tee time at Royal St. George’s and as his approach shot drifted right of the green, Hatton took the last of his frustrations out on his golf club.

Tyrrell Hatton has had better Fridays in his life, and so has this iron he just snapped. pic.twitter.com/GEYZofZQ1v

“Enough of the golf club,” NBC’s Terry Gannon said on the broadcast. “I’ve had enough.”

“One’s not going to make it home,” Justin Leonard added.

Hatton would get up-and-down for par, but that wasn’t enough to make the cut or cool his temper.