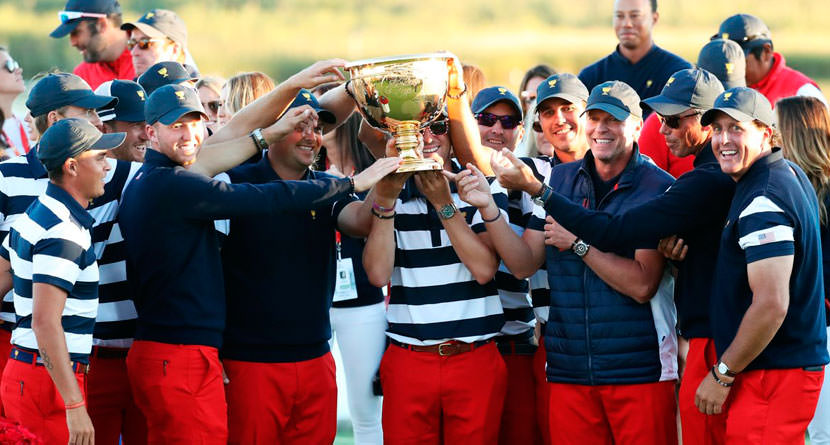 A dominant American performance was capped off with a whimper on Sunday as the red, white and blue only needed to secure one point out of a possible 12 up for grabs during the Sunday singles.

Coming into the one-on-one portion holding a 14.5 to 3.5 lead, Steve Stricker’s squad earned its clinching point in the fourth match out as Daniel Berger defeated Si Woo Kim 2&1 to get the U.S. to 16 points with eight matches still needing to be resolved.

The U.S. rolled in front of three former presidents the first three days of the event and then, for the first time in the history of the event, the sitting President of the United States was on hand to award Team U.S.A. the hardware.

Another historic moment at #PresidentsCup! For the first time in the event’s history, the sitting President is presenting the trophy. pic.twitter.com/a1aRho2HFY

The Associated Press’ Doug Ferguson wrapped up the day and the week.

President Donald Trump looked over at an American team that never had it so easy in the Presidents Cup and delivered an unassailable message in fewer than 140 characters.

“I have to say our Team USA, wow. Did you play well,” Trump said.

The Americans were never better.

They didn’t become the first team to win all five sessions, the only source of motivation on Sunday. They didn’t win by the widest margin since these matches against the International team began in 1994.

So powerful was this U.S. team that it needed to do little more than show up.

Daniel Berger, one of five newcomers to the American team, delivered the decisive point in the fourth of 12th singles matches. Phil Mickelson, a part of 23 consecutive team events, won the final point in his 100th career singles match.

“Honestly, it was really weird being out there today, knowing there was no chance of losing,” Dustin Johnson who halved his match on the final hole to miss out on a 5-0 mark at Liberty National. “I don’t know how to explain it, but it was like playing golf with my buddies. We were going to win no matter what.”

Two years after the Presidents Cup came down to the final two matches in South Korea, this one nearly ended on Saturday.

“This is a juggernaut of a U.S. team,” said Nick Price, in his third and final stint of the International captain, all of them losses. “They’re an overpowering team that played some phenomenal golf. It was tough to watch, especially being on the receiving end.”

The Americans won for the seventh time, and the eight-point margin was their widest since 2000 at the Robert Trent Jones Golf Club in Virginia.

Here are the complete singles highlights, courtesy of the PGA Tour.