Uihlein Looking For Opportunity And Finds Gold Mine 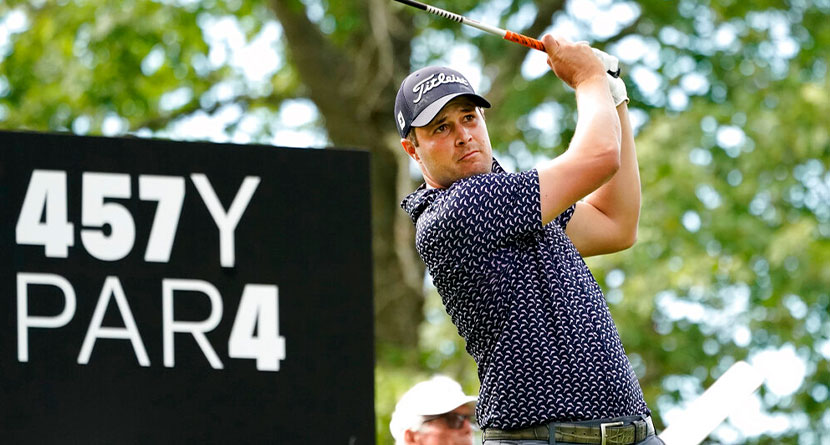 The appeal was an easier travel schedule with a chance to make more money from bigger purses. That’s why Peter Uihlein left the PGA Tour for Saudi-funded LIV Golf.

It’s also why he came to the PGA Tour in the first place.

Three years after Uihlein turned pro, he already had played in 32 countries on nine tours. The stamps in his passport were unlike most Americans with the pedigree of being a U.S. Amateur champion, two-time Walker Cup player and No. 1 amateur in the world.

He is best known as the 33-year-old who never finished better than third in his five years on the PGA Tour, and who has banked just over $11 million in six LIV Golf events. That’s more than he made on the course in his 10 years since leaving Oklahoma State.

“Financially, it’s been phenomenal,” Uihlein said. “I did five years in Europe, I did five years on the PGA Tour, and I was ready for something different. The first six events have worked out really well. As DJ (Dustin Johnson) says, I’m not too disheartened.”

Johnson is the biggest star among those defecting to LIV, with two majors and more weeks at No. 1 in the world by any player since Tiger Woods. He already has made some $31 million.

The narrative on LIV Golf starts with money, whether the player is Johnson or Brooks Koepka, Uihlein or Talor Gooch.

For Uihlein, no apologies are necessary.

Peter Uihlein left the PGA Tour for LIV for an easier travel schedule and chance to make more money. Those are the reasons the world traveler joined the PGA Tour in the first place. https://t.co/dSUBi3rfHx

“The way I view this is when I was in Europe and decided to join the PGA Tour, I did it for easier travel and to make more money,” he said. “When LIV came around, it was to play less if you want to. I can play less and make more. I don’t view what I did any differently than when I left Europe to come to the PGA Tour.

“Obviously,” he added, “some people don’t appreciate it.”

Uihlein is one of three players — along with Bryson DeChambeau and Matt Jones — who remain as plaintiffs in the antitrust lawsuit against the PGA Tour.

He has no intention of coming back — “I don’t miss playing the PGA Tour,” he said — and isn’t sure why he didn’t resign or why he didn’t remove his name from the lawsuit once LIV Golf joined, as Phil Mickelson and other players did.

The PGA Tour suspended Uihlein when he played the first LIV Golf event outside London in June, and he said the suspension is now four years. It could be more.

“They cut off communication with me because I wasn’t abiding to their request to stop playing,” he said. “They dinged me a year after each event. It stopped after four one-sided emails. I could be suspended for six years. I don’t know.”

There is more snark than bitterness toward the PGA Tour. He speaks highly of the impact the tour has on each community where it plays, particularly the charity. And he makes no excuses for not playing better except that it didn’t work out for him.

Uihlein actually was looking at a return to a European schedule a few years ago until the COVID-19 pandemic arrived. At that point, there were no real alternatives to splitting time between the PGA Tour and Korn Ferry Tour.

“The most fun I ever had was playing internationally,” said Uihlein, whose father, Wally Uihlein, was the longtime chairman and CEO of Acushnet, the parent company of Titleist.

The travel to faraway lands — Kenya and Kazakhstan, Singapore and Switzerland — meant staying in the same hotels as a part of a traveling circuit. That’s what it feels like now, and he’s happy. Of course, $11 million can lift anyone’s spirits.

LIV Golf didn’t chase after Uihlein. He sought out LIV.

“I reached out after Phil’s comments and Rory declared it dead,” Uihlein said.

That was in February, when Mickelson was quoted as saying the Saudis were “scary mother(expletives)” and all the big names who were leaning toward LIV suddenly pledged support to the tour. That prompted Rory McIlroy to say the rival league was “dead in the water.”

Turns out everyone has a price.

Uihlein tied for third in his LIV debut. He has had two runner-up finishes, the most recent a playoff in Saudi Arabia against Koepka, with whom he once shared a house in Florida while both were finding their way on the Challenge Tour in Europe.

That gave Uihlein enough points to finish third in the season standings. He made $2,125,000 for finishing second to his LIV teammate Koepka, $750,000 for being on the winning team and a $4 million bonus for being third in the points race.

Compare that with roughly $9 million he made playing for 10 years in what now is 40 countries. He also is up to 10 tours.

“Don’t forget, I’m also a MENA Tour member,” Uihlein said with a laugh, a reference to LIV Golf’s new alliance with the developmental tour to try to get world ranking points. “I keep asking for my player badge so I can add it to my collection.”

What he doesn’t know — and probably won’t — is how he compares with the best. Uihlein is clearly swinging it well and playing better. How would he fare against full fields, not just 48-man fields in a shotgun start, over 72 holes instead of 54?

“That’s what you signed up for,” he said. “I guess it’s like F1 and NASCAR. Who’s the better driver? You’ll never know.”

He doesn’t sound as though he cares. He loves the team aspect and the camaraderie he hasn’t felt since college and early days traveling the world. And yes, he loves the money. Uihlein said he hoped to make $11 million in a few years, not five months.