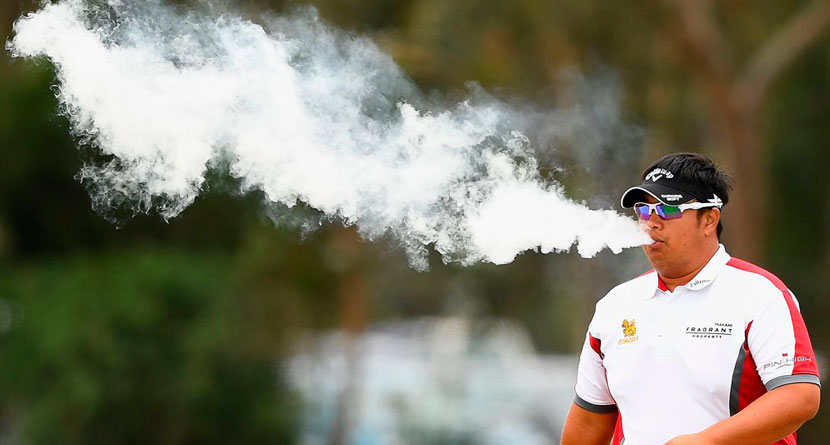 Under the cloak of anonymity, there are little or no repercussions for what is said. While keeping a name from attribution can rub some people the wrong way, the point of Golf Digest‘s Undercover Tour Pro gives fans a behind-the-curtain look at what really goes on inside the ropes on the PGA Tour.

The Undercover Tour Pro has tackled some taboo subjects in the past — gambling, cheating, groupies — but the latest edition is making waves because the UTP admits to playing on the Tour under the influence of marijuana. As it turns out, the PGA Tour’s new drug policy will make it easier and less detectable for players to get high on and off the course.

“Have I ever been high in a PGA Tour event? Sure.” https://t.co/tmobvZoUoG pic.twitter.com/P0uRNDRPBG

The Undercover Tour Pro, with Max Adler, can take it from there.

As you might have heard, the PGA Tour is rolling out a new drug-testing program to coincide with the start of the new season in October. In addition to peeing in a cup, we’ll now have our blood inspected for performance-enhancing substances like human growth hormone. Our banned list is being updated to match what’s used for Olympic athletes, and all suspensions for failing tests will now be announced to the public. No more speculating if so and so, who didn’t play a tournament for three months, really hurt his back, or was in fact “quietly suspended” for failing a test.

Sounds much stricter, right? Well, as a player who has smoked pot regularly for the past few years, I’m not worried. In fact, I applaud what the tour is doing.

The devil, you might say, is in the levels. Under the new policy, the amount of marijuana that can be in my system is being raised by a factor of 10. The threshold for failing a test was 15 nanograms but will now be 150 nanograms. How much is that? Marijuana is tricky because it stays in the system for a long time, and bodies process it at different rates. But a doctor friend tells me I could smoke a dozen days per month and possibly stay under the limit. I always drink a lot of water, as being hydrated helps avoid detection.

The tour is following the lead of the International Olympic Committee, which in 2013 raised the limit to 150 nanograms, a threshold I consider much more reasonable. The priority is to prevent athletes from gaining a competitive advantage, not to embarrass them. Among PGA Tour players, no one cares about recreational drugs. As even regular golfers can tell you, ripping a bowl is going to help you make birdies about as much as chugging a beer. As in, you can delude yourself into thinking a little “swing oil” or “green wax” helps, but in any money game, your opponent would love to see you imbibe.

Have I ever been high in a PGA Tour event? Sure. Haven’t done it often, but if I’m teeing off Sunday near last place with no way to move up the leaderboard meaningfully, I’ll treat myself to making the day a little more fun, or at least different. I’ve smoked beforehand with the other players in my group, too.