U.S. Walker Cup Team Wins Away For First Time Since 2007 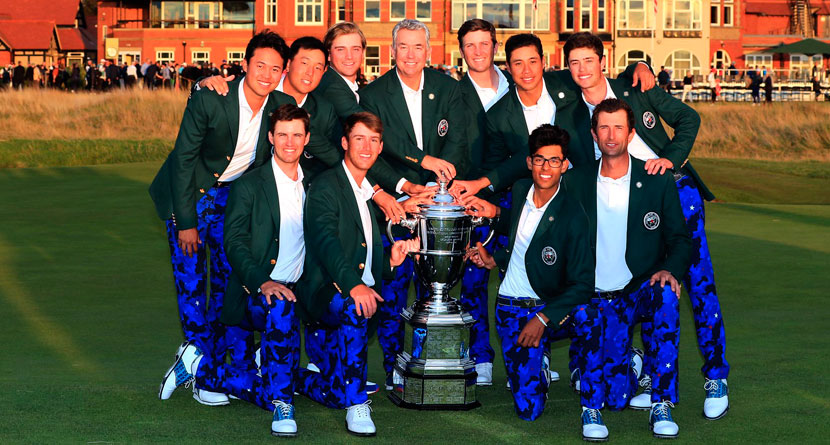 The United States Walker Cup team pulled off an unlikely and historic comeback on Sunday at Royal Liverpool. The Americans won eight of the 10 Sunday singles matches to erase a deficit and become the first U.S. team to win a road victory since 2007.

With their backs against the wall trailing 7-5 after Saturday’s foursomes and singles matches, the Americans got a pep talk from the oldest player on their team, 28-year-old Stewart Hagestad.

The only returning Walker Cupper on the squad, Hagestad told the room filled with the best amateur golfers in America that how they played on Sunday would be remembered for the rest of their lives.

“If you play amateur golf and have any aspirations to turn pro and before you do that the Walker Cup is on that goal list of yours, it doesn’t matter if you win or lose, but leave everything you have on the table,” Hagestad said, according to GolfChannel.com’s Brentley Romine. “You’ve put in so much work and made so many sacrifices to put yourself in this position, and you’ve earned your way to be here, just go do what you’re capable of. All the pressure is on them, everyone here is rooting for them, they’re up, it’s on their territory, they’re supposed to win, you have nothing to lose.

“Whatever you have to do, do it, because you’re going to remember tomorrow, for better or worse, for the rest of your life, so if we can turn the tide and do something really special, it’ll be something we’ll talk about for the next 30 or 40 years.”

Here’s a full look at the results from Sunday’s singles and a view of how a dominant USA won The #WalkerCup ?? pic.twitter.com/iDvbpI8xXI

The Americans got back a point in the Sunday morning foursomes and then boat-raced the Europeans in the afternoon to win 15.5 to 10.5.

“Wow, what a day,” Cole Hammer, the No.1-ranked amateur in the world said. “We hadn’t won on foreign soil since 2007. That was kind of in our heads: it’s been 12 years, it’s time for another American team to win over here. This meant the world to me.”

“I honestly thought that these guys would let their talent come to the surface,” U.S. captain Nathaniel Crosby said. “I liked the idea that the wind was laying down a little bit this afternoon, but these guys have been over here for seven or eight days. The singles were amazing. The guys played great.”

The American team, which is made up of players with big-time professional golf aspirations, will have a tough comparison to go up against as it relates to the 2007 team that they matched in terms of winning on foreign soil. A team that featured the likes of Dustin Johnson, Rickie Fowler, Webb Simpson, Jamie Lovemark, Kyle Stanley, Billy Horschel among others went on to have major and professional success.

12 years in the making ?? A first away win since 2007 for USA #WalkerCup pic.twitter.com/wIRfU9spR4

Hammer, along with teammates Hagestad, Akshay Bhatia, Brandon Wu, Steven Fisk, Isiah Salinda, John Augenstein, Andy Ogletree, John Pak and Alex Smalley will now make their next career moves with one of the biggest accomplishments in amateur golf under their belts.