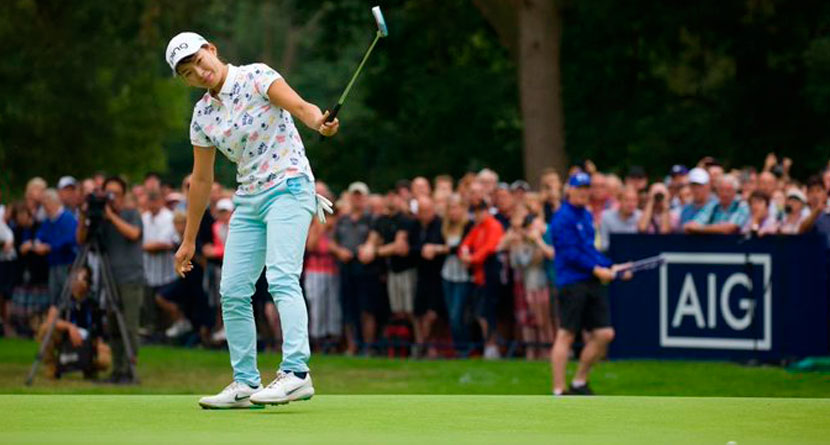 Japan’s Hinako Shibuno is known by the Japanese media as “The Smiling Cinderella,” and the 20-year-old lived up to her moniker by providing a fairy-tale ending at the AIG Women’s British Open on Sunday.

Entering the day with a two-shot lead, Shibuno trailed after just three holes of her final round that included a four-putt double bogey on the par-4 third. She made two birdies over the course of the next four holes, but dropped another shot on the par-3 eighth to turn for home in 1-over par 37.

The back nine was where Shibuno made her hay all week, and Sunday was no exception. Now playing the role of chaser, Shibuno reeled off four birdies in the first six holes of the back nine to draw even with clubhouse leader Lizette Salas, who fired a 7-under par 65.

Shibuno came to the home hole needing a birdie win and a par to force a playoff, but there was never a par putt to hit. Playing her first tournament outside of Japan, Shibuno drained the 18-footer to win her first major championship.

The out-of-nowhere win for Shibuno is destined to have a large impact on Japanese golf, even if the purveyor of the inspiration wasn’t able to fully grasp how she did it.

“I do feel that I have accomplished something great,” she said in her champion’s press conference. “But I really don’t know the reason why I was able to accomplish it.”

Takumi Zaoya, a golf agent who is married to the now-retired Japanese star Ai Miyazato, translated for Shibuno during her press conference and was asked afterward the impact Shibuno’s win would have on her home country.

“This will extend beyond golf and sports in Japan,” Zaoya told GolfChannel.com’s Randell Mell. “People who don’t know golf will know about this, and know her now. And when she plays in Japan again, people who’ve never watched golf before will probably want to come see her.”

As a Japanese LPGA Tour standout, the win gives Shibuno options for the next stage of her career. The win allows her the option to take up LPGA Tour membership this year and next or use a one-time deferment to take up full membership next year.