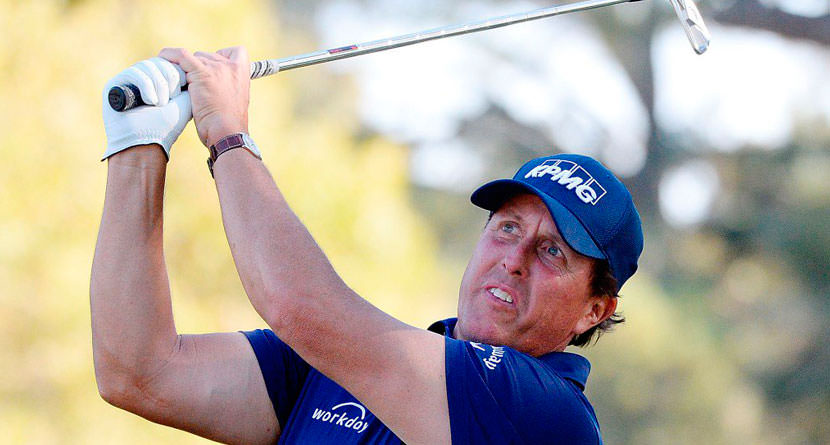 Phil Mickelson notched his best finish on the PGA Tour at the Safeway Open on Sunday, but there’s an argument growing steam that believes Mickelson and Chesson Hadley were robbed of more than $100,000.

The debate stems from a bunker shot Tony Finau hit on the 12th hole during the final round. Facing a 25-yard, short-sided greenside bunker shot from a plugged lie, Finau looked destined to drop at least one shot in his chase of leader Brendan Steele until this happened.

Finau’s ball crashed into playing partner’s Jason Kokrak who had just chipped up from 30 yards to kick-in range. The break saved Finau at least a stroke, which led to his solo second-place finish and cost Mickelson and Hadley $103,000 each.

The practice of not marking a ball near the hole has become something known to fans and media as “backstopping.” One of the most vocal critics of backstopping is Golfweek and Golf Channel contributor Geoff Shackelford who has led the charge against the practice for the better part of the last few years.

Here’s Shakelford’s argument with some thoughts from the newly-crowned Player of the Year.

During Sunday’s Safeway Open final round we had yet another example of the backstopping practice prevalent only in men’s professional golf (here, here and here for 2017 samples). In case you haven’t been watching, this is the now-regular practice where golf balls are left down on a green unless it’s in the path to the hole, with various motives and theories as to why this has become practice instead of players simply marking their ball to protect the field. Speed of play is cited as the reasoning.

As Will Gray points out here for GolfChannel.com, Tony Finau was likely saved a shot during the 2017 Safeway Open final round when he had a buried lie with playing partner Jason Kokrak’s 34-yard wedge shot was near the cup. In a post round interview with George Savaricus, Finau said he’d forgotten Kokrak’s ball was by the hole when he hit.

“Funny thing is, I forgot he hit. I was so focused on what I needed to do and how hard my shot was,” Finau said. “I hit a perfect shot, but it was still going to go about 25-30 feet past. It was a bonus to hit his ball. I used the rules to my advantage, I guess, not knowing.”

In responding to Gray, Thomas said the practice of playing with a ball down by the hole happens “MAYBE” five times a year and is “part of the game, if I want to rush and hit a shot for that reason, it’s my right.” So to recap: the player of the year says it’s his right to rush a shot before a player can mark it, to gain an advantage that happens maybe five times a year. There you have it!

The implication of Thomas’ second tweet is unclear to me. He retweeted a fan’s thought related to grandstands and spectators that suggests he views this as a rub of the green matter, even while believing it’s his right to take advantage of a competitor’s ball on the green.

Somewhere Bobby Jones is harumphing at this admission.

The Rules allow a tournament committee to disqualify a player if they determined “players have agreed not to lift a ball that might assist any competitor.”

Thomas also suggested the players are often too far away to mark a ball in time and this is why the practice occurs…five times a year, “MAYBE”.

Half the time in these cases–that’s MAYBE 2.5 times a year in Thomas’s thinking–the walking distance is apparently too great for a player to wait, as Thomas demonstrated on the final day at TPC Boston earlier this season when Marc Leishman chipped up to the sixth hole and Thomas played quickly to enjoy what we now know was a hoped-for advantage.

But if we take the Kokrak-Finau example at Safeway, it would require an extra 20-22 seconds to have walked the 34 yards to slap a coin down before Finau played. Since Finau forgot Kokrak had hit, this wasn’t possible. I’m not sure how you forget that a playing partner hit a shot, but alas, this is the situation.

Thomas believes too much attention is being paid to the subject, but prominent others are not agreeing. While many don’t see this practice as a major issue, I do not agree for the very simple reason that professional golf’s success is built on the integrity of its players. Corporations pay handsomely to be part of professional golf because they view the athletes as the most honest and upstanding in all of sports. Many fans follow the sport and love it because the athletes have such integrity.

Having a top player openly confessing to taking advantage of a ball on the green to possibly better his chances of finishing near the hole, is not great. If we found that his peers knows he does this and leave the occasional ball down to help him, we’d have the makings of disqualification for violating the rules. That this is even a “thing” speaks to a cultural shift and behavior that, if it becomes commonplace, could cause some to question the integrity of the players. Or, at the very least, make fans question if the players are legitimiately competing or colluding for peculiar reasons.

Besides, play can be sped up in much better ways than this.