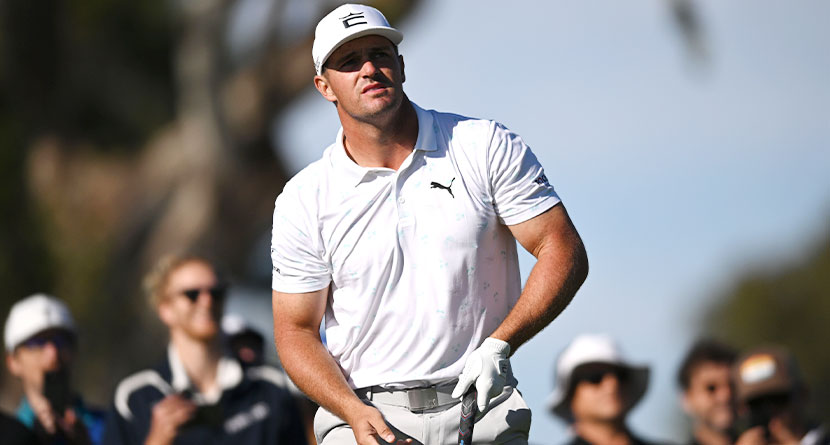 The first big PGA Tour event of the year will be without much of its star power this weekend at the Farmers Insurance Open.

The list of names trunk-slamming on Thursday evening is impressive: Bryson DeChambeau, Brooks Koepka, Jordan Spieth, Rickie Fowler, Sam Burns, Tony Finau and Phil Mickelson. Among the cadre of MCs, the plights of DeChambeau and Spieth were the most noteworthy due to physical ailments that beleaguered both men at Torrey Pines.

Spieth, who required a hospital visit on Wednesday evening for a stomach bug, shot rounds of 70-78 and reported still feeling “awful” coming off the course on Thursday afternoon. While his long-term prognosis looks fine, he’ll need to rest and recover quickly as he is slated to play in next week’s AT&T Pebble Beach Pro-Am, the following week’s Waste Management Phoenix Open and then the Genesis Invitational the week after that.

As for DeChambeau, there’s another level of uncertainty surrounding the big-hitter. Gesticulations around Torrey Pines’ South Course caused armchair doctors to declare that his back had betrayed him, but upon further review, it appears his ailing left wrist still isn’t right.

Lots of observers suspected Bryson’s back would eventually scupper him. Seems the trouble has started ahead of schedule. This is very Tiger-esque pic.twitter.com/wVLY9wCmUm

The wrist, which caused DeChambeau to withdraw from The Sony Open in Hawaii earlier this month, was noticeably bothering the 2020 U.S. Open Champion throughout his second round on Thursday in which Bryson’s even-par 72 left him one shot shy of making the cut.

After seeing his trainer in Colorado following the Sentry Tournament of Champions, DeChambeau declared the wrist fit for play, however that proved not to be the case. Following his second round in San Diego, DeChambeau refused media requests for comment, saying only, “I’m not going to talk about that today.”

DeChambeau is scheduled to travel halfway across the world this weekend to compete in next week’s Saudi Invitational alongside a number of other top pros.