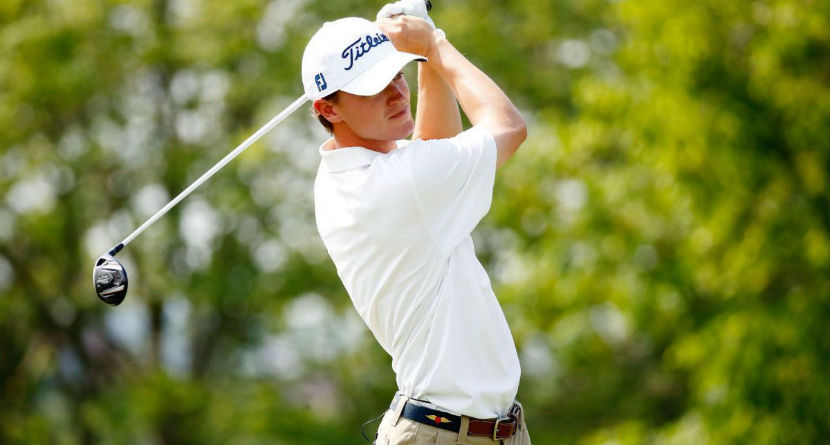 Golf’s unique rules claimed two more victims during the U.S. Amateur this week at Riviera Country Club. Two-time U.S. Open participant Chris Crawford and decorated Mid-Am Todd Mitchell both failed to advance out of the stroke play portion of the Am due to disqualifications.

Crawford, 23, who lives outside of Philadelphia, got off to a good start earlier in his second round of stroke-play qualifying at Bel Air Country Club in Los Angeles and was in position to make the 64-player match play when he heard his caddie mention something about slope when getting a yardage from his distance-measuring device.

“I was a little flustered and knew something was wrong,” Crawford said via phone on Tuesday night. “I asked my caddie what the deal was with his range finder. When he said it had a slope adjustment, I knew instantly that I had to disqualify myself. I notified the walking scorer in my group, and after getting in touch with a rules official I learned it would have been a 2-shot penalty if I had used it just once, but the second time is a disqualification. I have my own range finder and I know the rule, but I didn’t think his would have that.”

A slope reader can be on a distance-measuring device, but it cannot be accessed. The information that Crawford was given caused him to believe it was being used; he checked and it was on. If it had been turned off, there would have been no violation. But instead, Crawford was deemed in violation of Rule 14-3 “for multiple uses of a distance-measuring device with the slope feature activated by his caddie,” according to the United States Golf Association, which administers the tournament.

Fun with rules at US Amateur:

In 2014, the USGA began allowing the use of such devices as part of a local rule that has been adopted for all of its amateur events but not the U.S. Open, U.S. Women’s Open or U.S. Senior Open. Distance-measuring devices are not allowed on the PGA, European or LPGA tours, and not on the Web.com Tour except in some experimental instances.

“I was so upset and flustered by the situation,” said Crawford, who did not name the caddie. “I know some people in that situation would have gone berserk. I’m obviously mad. I still am right now and will be for quite a while. I didn’t say anything to him. What can I really say at that point?”

Asked if the slope device on the range finder really would have given him an advantage — and if anyone would have known had he not said anything — Crawford said he never considered playing on.

“I didn’t gain an advantage but I know the rules,” he said. “[The late amateur] Bobby Jones said you might as well congratulate a man for not robbing a bank [if you applaud him for disqualifying himself] in that situation. I knew what the rule was and I didn’t have a choice. I know nobody else would have known. But I knew. I knew what the rules was. It’s just the way it is.”

The other man to receive a painful DQ was Mitchell, who failed to sign his scorecard after posting 67 on Monday. Ouch.

Thank you to those that are following… I’ve been DQ’d for not signing my scorecard. Played great too…

Yes it’s true, not the scorers fault. I’ve spoken with the @USGA and they feel terrible. If I’d signed the card we wouldn’t be discussing

The U.S. Amateur continues with the round of 16 on Thursday from Riviera Country Club with the Championship match scheduled to be on held Sunday afternoon.