US Guarding Against Overconfidence In Presidents Cup 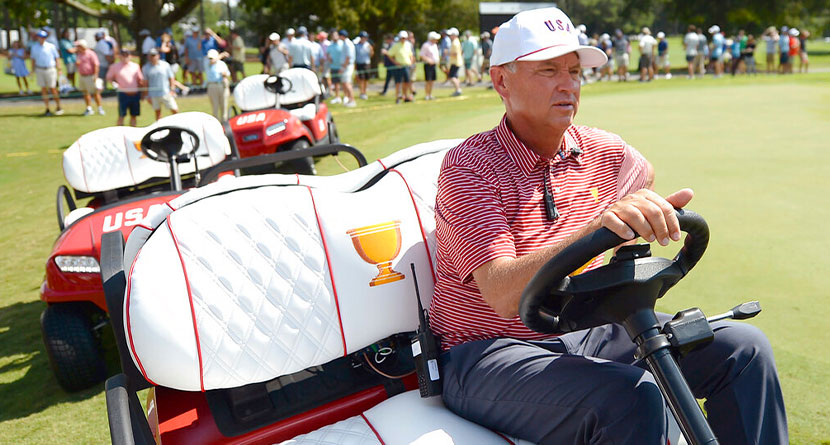 CHARLOTTE, N.C. (AP) — The American team room at Quail Hollow has photos of winning teams from the Presidents Cup over the years, and it’s a wonder there’s room for all of them.

The matches began in 1994. The Americans have lost just once.

Captain Davis Love III would be quick to point out one detail from the most recent picture at Royal Melbourne three years ago: Only four players from that team are at Quail Hollow this week — Patrick Cantlay, Xander Schauffele, Justin Thomas and Tony Finau.

Go back to the last U.S. victory on home soil, at Liberty National, such a romp it almost ended before Sunday singles. The only players still around from that 2017 team are Thomas and Jordan Spieth.

“We come into these things wanting to win every time,” Love said Tuesday. “I tell them, ‘You don’t have a record.’ This 12 has never competed as a team before. This team understands. They want that picture next time.”

Odds are heavily stacked in their favor they will pose with gold trophy again on Sunday. It’s one thing to have captured the Presidents Cup the last eight meetings against the International team, and 10 out of 12 times (one ended in a tie).

Throw in the LIV Golf factor — it has depleted the International team far worse than it did the Americans, at least based on current form and health — and this has all the markings of another runaway.

Love has heard this story, too.

“We’re used to being called the favorite, even when we lose three Ryder Cups in a row,” said Love, who was on six “favored” teams that didn’t win a Ryder Cup or Presidents Cup. “Statistically, yes, we have a higher ranked team. But I know a bunch of those young guys on their team, and they’re going to come in with a chip on their shoulder.”

Tuesday was the first full day of practice for the 12-man teams on a Quail Hollow Club course that is familiar to most from hosting the Wells Fargo Championship most years, and the PGA Championship in 2017.

Adding to the confidence for the U.S. team is the Ryder Cup one years ago at Whistling Straits, a 19-9 victory against a European team that was aging and had no support from fans because of COVID-19 travel restrictions.

Seven Americans return from the team. Missing is LIV defector Dustin Johnson. Brooks Koepka and Bryson DeChambeau went to LIV, too, but both are still making their way back from injury and probably wouldn’t have been on this team, anyway.

This team is so young that the player with the most Presidents Cup experience is Spieth, who turned 29 this summer and is playing for the fourth time.

His idea to stay grounded was to compete individually among a team setting.

“It’s almost like we’re all going to compete against each other to get the most points we can on our team. We want the bragging rights on our own team,” he said. “And if we stay within ourselves, then I don’t think you get overconfident in the entire situation.”

International captain Trevor Immelman had a tougher time with LIV defections, with two top-20 players — British Open champion Cameron Smith and Joaquin Niemann — not announcing their departures for the Saudi-backed league until three weeks ago.

He has eight Presidents Cup rookies on this team. Only three of them are among the top 25 in the world (all 12 Americans are in the top 25).

But there’s something about youth and inexperience that has him encouraged.

Immelman is not willing to look back, whether it’s three years ago and the close call at Royal Melbourne or three weeks ago when the last of the players went over to LIV.

He said all of the players who left — starting with good friend Louis Oosthuizen in June right up until Smith and Niemann after the Tour Championship — were in touch with him about their thinking and their decisions. And he said they all knew the ramifications.

“I respect those guys making those decisions,” he said. “I also do respect them for keeping me in the loop and making sure that I understand exactly where we’re at at all times so I could try and be as prepared as I could. Am I disappointed that they’re not able to be here? Absolutely.

“But we have the 12 guys here that we love and wanted to be here, and now we get to go. We get to go up against a strong American team. So we’re looking forward.”