US Leads Presidents Cup As Kim Gives Internationals A Spark 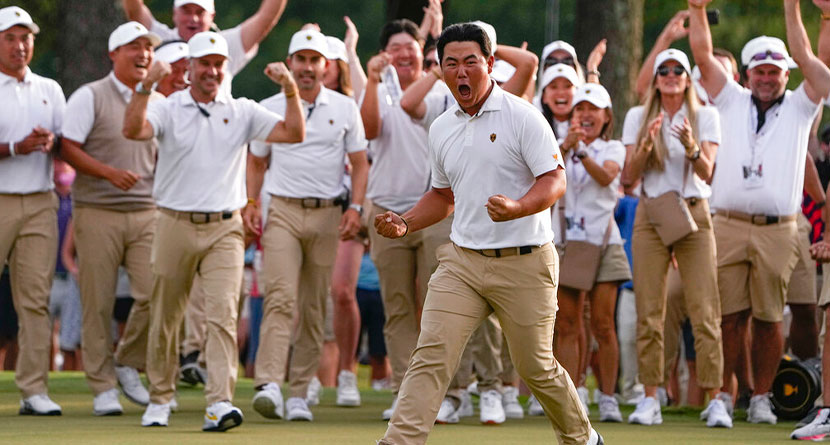 CHARLOTTE, N.C. (AP) — The day started out with memories of 2017 at Liberty National, where the Americans dominated so thoroughly they nearly clinched the Presidents Cup on Saturday.

By the time 20-year-old Tom Kim slammed his cap to the ground in a wild celebration, and Cameron Davis finished with three straight birdies for another comeback win, all anyone could think about was the 2012 Ryder Cup at Medinah.

The Americans still lead by four. It just felt much closer.

Kim, a young talent with a massive personality, delivered the first big moment for the International team. He gave his team a spark with a 55-foot eagle putt after driving the 11th green. And on the final hole, he made a 10-foot birdie putt in a 1-up victory over Patrick Cantlay and Xander Schauffele.

He took a few steps back as the ball neared the hole, dropped his putter and slammed his cap to the ground in a raucous celebration.

TOM KIM FOR THE WIN!

“I wanted that putt more than anything in the world,” Kim said.

In two matches Saturday, Kim and K.H. Lee took out world No. 1 Scottie Scheffler and Sam Burns, and he and Si Woo Kim beat the formidable Cantlay-Schauffele tandem.

The International team split the foursomes matches in the morning and won the fourballs session 3-1. It was enough to cut into a big deficit, enough to give the underdogs hope.

The Americans sure didn’t sound as though they had a 11-7 lead going into the 12 singles matches — typically their strength — as they go for a ninth straight victory.

“If anything, we’ve got to refocus, and we’ve got a lot of (ticked) off guys that want to come out really strong tomorrow,” Jordan Spieth said.

No one on the American team was at Medinah for the 2012 Ryder Cup except for Davis Love III, the captain at both.

The Americans were leading big all week that year until Ian Poulter birdied the last five holes that gave Europe a load of momentum that it carried into Sunday. Trailing 10-6, the Europeans staged the greatest comeback by a visiting team in Ryder Cup history.

“They got some momentum today,” Love said. “They started making some putts, and we’re going to have to turn around tomorrow and come out hot and try to get the momentum back.”

No one was more reliable than Spieth and Justin Thomas, a juggernaut on this mighty U.S. team. They won two matches Saturday without ever seeing the 16th hole except for riding in a car to cheer on teammates.

They became the first American tandem to go 4-0 in team matches since Tiger Woods and Steve Stricker in 2009 at Harding Park.

Thomas figures he had to make only 10 putts over 30 holes in two matches because Spieth was doing so much damage on and around the green. Even on their last hole Saturday afternoon, with Thomas in tight for a 5-foot putt that would have won it, Spieth chipped in from the front of the green.

“I legitimately think I picked my coin up more than I hit putts,” Thomas said. “So yeah, my partner’s pretty good.”

On the course, Sungjae Im and Sebastian Munoz were up big in match they would win in 16 holes against Tony Finau and Kevin Kisner, the only time in 18 matches this week that an International team didn’t trail at any time.

The Americans were ahead in the other two. The rout was on, and then it wasn’t.

Schauffele gave his team a 1-up lead with a 40-foot putt from short of the 15th green, only for Si Woo Kim to make a 4-foot birdie on the par-5 16th to square the match. Si Woo Kim also made a 5-foot par putt to stay tied on the 17th, a putt that had Tom Kim so nervous he covered his eyes and peeked through his fingers.

And then Tom Kim stole the show.

International captain Trevor Immelman noticed Kim some 35 yards behind everyone else in the group, 235 yards from the green with a 2-iron in his hand. Behind the 20-year-old Korean was a group of American stars — Thomas, Spieth, Collin Morikawa, all major champions — also watching. What a stage.

“And this kid pures a 2-iron to 10 feet and makes the putt,” Immelman said. “To me, that’s impressive stuff.”

Not to be overlooked was Davis, a bright spot on the International team and one of eight rookies for Immelman because of some four players who gave up the Presidents Cup for Saudi-funded LIV Golf.

The match was tight, but Burns and Billy Horschel never led by more than 1 hole. Davis holed a 12-foot eagle putt on the 16th to square the match. On the next hole, Davis drilled a 15-foot birdie putt for the first lead of the match.

Davis and Scott each had about 10 feet for birdie on the final hole, and Burns hit his approach to 4 feet for what looked to be a certain birdie. Davis made a third straight birdie, another point for the International team, more momentum for Sunday.

“I kind of went numb, to be honest,” Davis said. “I was in a situation where I was going for it. But I just got in a groove that made golf feel easy for once.”

And that made it a little bit harder for the Americans.