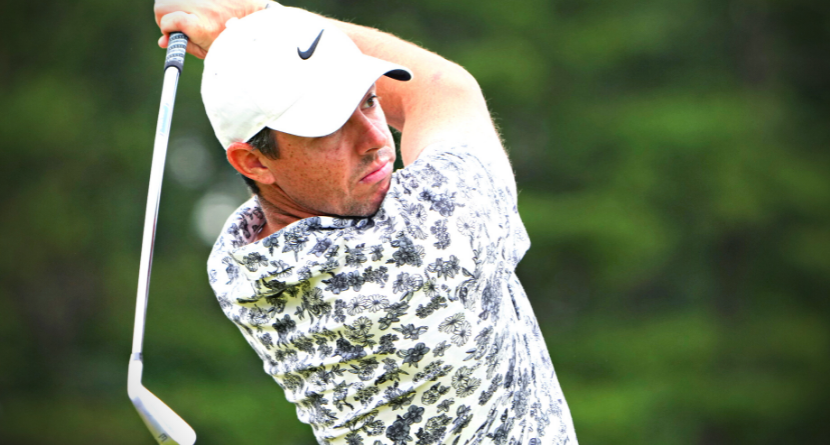 Rory McIlroy is getting the hang of this “first round at a major” thing.

It’s an absurd statement, yes. Yet, prior to May’s PGA Championship, we’d grown accustomed to watching the four-time major champion shoot himself out of the tournament on Thursday before mounting a futile weekend charge.

McIlroy once again finds himself in prime position at the quarter-pole after a 3-under-par 67 in the first round of the U.S. Open at The Country Club, two strokes shy of the number he posted to set the early pace at Southern Hills last month. He’s one shot back of leader Adam Hadwin of Canada, who posted a 4-under-par 66 as the wind picked up amid the afternoon wave.

“It’s been eight years since I won a major, and I just want to get my hands on one again,” said McIlroy, who’s coming off his 21st career PGA Tour victory at last week’s RBC Canadian Open.

McIlroy’s only blemish was a bogey on his last hole, the par-4 ninth, where he hung his approach out to the right and failed to get up and down from the thick stuff. He carded four birdies and played with a pronounced intensity, tossing away clubs in disgust and taking some angry lashes at the furry lip of a bunker before making a world-class par save on the fifth hole.

“You’re going to encounter things at a U.S. Open, whether they be lies or stuff like that, that you just don’t really encounter any other week,” McIlroy said. “It’s hard not to get frustrated because I’m walking up there going like, just come back into the bunker. The thickest rough on the course is around the edges of the bunkers. So I was sort of cursing the USGA whenever I was going up to the ball.”

It’s Thursday morning. A ball ending up in a really shitty spot *has* to be in the budget for U.S. Open week. Really not understanding this freak out. pic.twitter.com/eMQLcihkfe

An unheralded quartet are tied with McIlroy at 3-under: Joel Dahmen, David Lingmerth, Callum Tarren and M.J. Daffue. One back of that group is Dustin Johnson, who performed the best of the LIV Golf rebels with a 2-under 68.

The task now is for McIlroy to keep the pedal down. His run at a third PGA Championship stalled after the first round, and he ultimately settled for an eighth-place finish.

“You feel like you’re right in the tournament from the start of the week, which is nice,” McIlroy said. “I’m going into [Friday] with the mindset of let’s keep it going, rather than where is the cut line or whatever. If you don’t get off to a great start, those thoughts start to creep in. It’s certainly a different mindset when you get off to a good start, and yeah, I’ve just got to keep it going.”

You can watch highlights of the first round below: