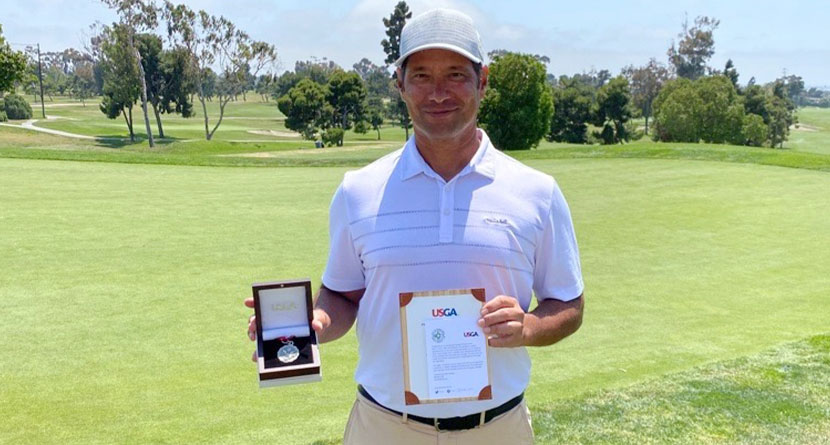 Marcus Meloan was having a dream week at the U.S. Senior Open when weather blew in on Saturday and rained on his parade.

The 56-year-old sectional qualifier from San Diego was disqualified after playing 14 holes during the third round when he was not in position to restart his round following a three-hour weather delay.

Sitting at 5-over par for the tournament and hovering around T20, Meloan missed his restart time by more than five minutes and was subsequently disqualified from the tournament.

“Following that restart, we did have a player that was late to resume,” USGA rules official Ben Schade said on the Golf Channel broadcast. “So resumption times, they work very much the same as a starting time that we would have at the beginning of our round where we need to be ready to play within five minutes of that time, no later than five minutes of that time, to avoid disqualification.

Marcus Meloan was not allowed to continue after 14 holes on Saturday due to a rarely used time rule.https://t.co/i5o3MUeuke

“How do you miss the start time?” analyst John Cook said on the Golf Channel broadcast. “I’m sorry, that’s just … “

“Especially when everybody else makes it,” analyst Lanny Wadkins added.

Rule 5.7c states: You must resume play at the time set by the Committee and from where you stopped play on a hole or, if between two holes, at your next teeing area, even if play is resumed on a later day.

The player must be present at the location identified in (1) and ready to play: At the time set by the Committee for play to resume, and The player must resume play at (and not before) that time.

Meloan was going along great before the weather delay. On Friday, he was one of just two competitors in the morning wave to shoot under par; he fired a 1-under 69. He was 2-over par through 14 holes on Saturday when the weather blew into Omaha.

There was no word on why Meloan was late to the resumption of play.

Meloan’s friends back in Rantoul, Illinois started a GoFundMe for the 1983 graduate of Rantoul Township High School, raising nearly $1,400 to help Meloan pay for travel and housing expenses.

Had Meloan made his resumption time and stood pat on the leaderboard over the next 22 holes, he would have been in line to collect over $40,000.