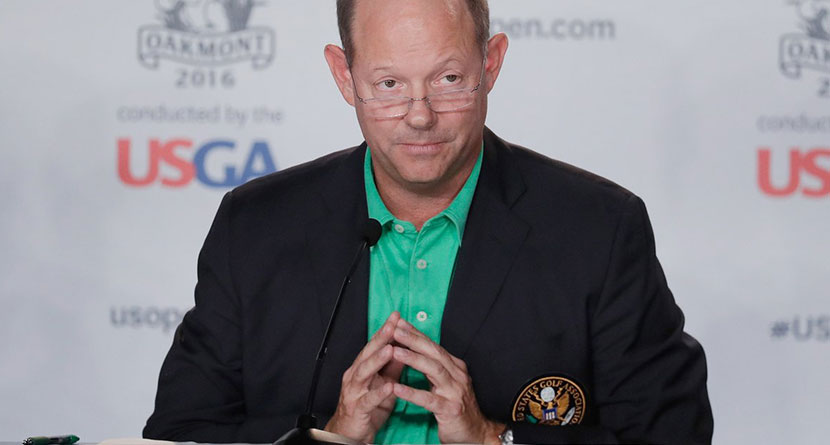 Four of golf’s biggest and most influential governing bodies have been on rocky terms for the past few years over rules decisions and implementations. The USGA, the PGA Tour, the R&A and the PGA of America have had differing opinions on how the game has been administered in recent years.

The straw that broke the camel’s back, as it were, was the anchoring ban, which will celebrate its first anniversary on Jan. 1. This week at the PGA of America’s annual meeting, Mike Davis, the USGA’s executive director offered a mea culpa of sorts in an attempt to bridge the gap.

GolfChannel.com’s Rex Hoggard had the report.


In the spring of 2013, the battle lines were clearly drawn in the impending debate over the USGA and R&A’s push to ban anchored putting.

The PGA Tour and PGA of America opposed the new rule, but the USGA and R&A went on to ban the anchored stroke, creating a rift, albeit temporary, between the USGA and PGA. On Friday at the PGA’s annual meeting, USGA executive director Mike Davis offered the PGA’s membership a mea culpa.

“I will say going back three, four years ago it was a moment in time where our two organizations got sideways with one another. When I looked back, I think both sides have learned a lot of things,” Davis said.

“Regardless of where you sat on that issue, we all learned from it. I will give you to the extent that we erred as an organization I apologize to this group. Things got public that should have never gotten public and it didn’t make the game look good.”

Davis went on to say the relationship has been repaired between the two organizations and that the USGA and PGA work much closer now. Davis also said the USGA will be more “opened minded” about future rule changes.

“We are assessing how we can make the Rules of Golf easier, plain English, easier to apply. Some of the rules right now are simply too difficult,” he said.

While there may never be unanimous agreement among the four biggest organizations in the game, this past week’s meeting wasn’t a bad start.