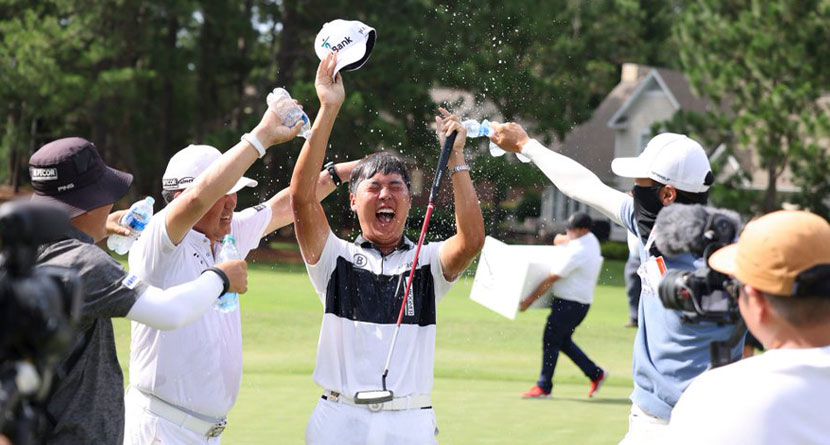 Three days of joyful, inspired play in the Inaugural U.S. Adaptive Open at Pinehurst Resort’s Course No. 6 ended in a dramatic triumph befitting a USGA national championship. Simon Lee, 25, of the Republic of Korea, shot a final-round 71, then went birdie-par in a two-hole playoff on Wednesday to win the men’s overall title over Felix Norrman, while Kim Moore, 41, of Portage, Mich., went wire-to-wire to earn the title of women’s overall champion.

“It’s pretty cool to be part of a little bit of history in golf,” said Moore, the women’s golf coach at Western Michigan University. “I’m thankful for my friends and family and their support and all the people back home that are wishing me good luck and have been watching. It’s just been very humbling and exciting for me this whole week, and it’s just been nothing but amazing.”

Moore, who was born without a right foot and a severely clubbed left foot, said after yesterday’s round of 8-over-par 80 that she wanted to come back and play better today. She did just that, carding a final-round 76 to pull away and finish eight strokes ahead of her closest pursuer, Ryanne Jackson, of St. Petersburg, Fla., with a 16-over-par 232 total.

Western Michigan coach Kim Moore wins the inaugural U.S. Adaptive Open by seven shots! What an inspiration she is to all of college golf! pic.twitter.com/wBKq5rnADE

In 2015, the Women’s Golf Coaches Association created the Kim Moore Spirit Award to recognize a student-athlete or coach who exemplifies a great spirit, mental toughness and a positive attitude toward the game, as well as being a role model to others. Throughout this week, Moore displayed those qualities in abundance as she displayed her on-course talents for the world to see.

“I think we’re going to have a lot of rise in participation in adaptive golf,” said Moore. “I hope that’s what this brings. I’m looking forward to seeing what happens.”

While the outcome of the women’s competition was not much in doubt, the battle for the men’s crown came down to the wire, and then some. Lee began the day with a two-stroke lead over Norrman, also 25, of Sweden. Both players have intellectual impairments – Lee was diagnosed with a form of autism that makes communicating particularly difficult, while Norrman has tyberios sclerosis, a rare genetic condition that impacts neurological pathways.

We all should be inspired watching the #USAdaptiveOpen. Good luck to all the competitors and never give up!

Playing in the final group, Lee and Norrman birdied the par-5 opening hole. Lee followed with another birdie at No. 2 to extend his lead to three, and then things began to tighten. Lee bogeyed the par-4 third hole and, on the fifth, Norrman rolled in a birdie putt while Lee bogeyed. The two-shot swing resulted in a tie, and the players stayed close for the rest of the round. Twice on the back nine, Norrman moved ahead by one stroke, only to give the lead back with bogeys on the subsequent holes.

With a crowd encircling the 18th green, both Lee and Norrman saved par to force a two-hole aggregate playoff. In the playoff, Lee drained a 14-foot birdie putt on 17 to move ahead by one after Norrman missed an 18-footer for birdie. On 18, Lee stuck his approach shot inside 6 feet to keep up the pressure. While his birdie putt slid by, Lee tapped in for par to seal his victory and enjoyed a celebratory dousing of water from his inner circle.

That winning feeling, brought to you by the men’s #USAdaptiveOpen champion Simon Lee! pic.twitter.com/AAy6BjBSCU

“I think this is the best I’ve played in a few years now,” said Norrman after his round. “It was really nice to play with Simon. He’s a really good player.”

First-round men’s division leader Chad Pfeifer of Caldwell, Idaho, who played in the final group with Lee, Norrman, and Jack Bonifant of Kensington, Md., fired the round of the championship, a 4-under 68, to finish alone in third place at even-par 216.

Words don’t do it justice, but it was a special week for all involved. #USAdaptiveOpen pic.twitter.com/vcyAyBb4qb

More than the finishing scores, this championship will long be remembered as the first chapter in what has the potential to grow into one of the USGA’s most impactful events.