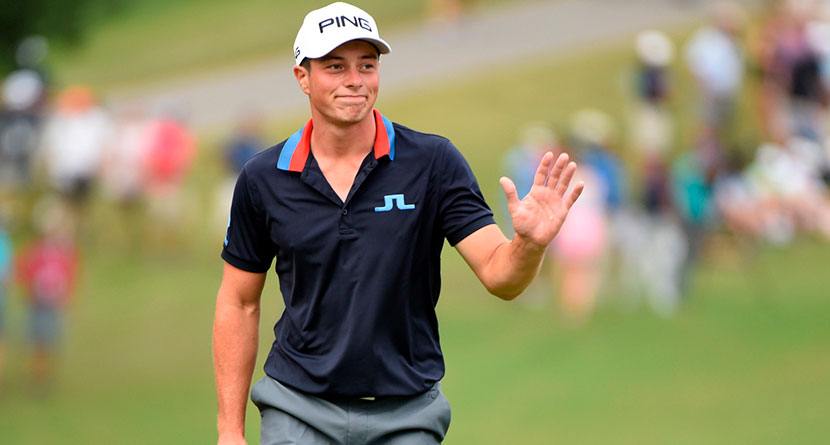 Of the three uber-talented college products that emerged on the PGA Tour in 2019 — Matthew Wolff, Collin Morikawa and Viktor Hovland — many would argue that the one without a PGA Tour win prior to this weekend, Hovland, was the one with the brightest future.

While projecting professional success based on amateur achievement has proven to be a fool’s errand in golf, Hovland’s cross-over potential has been clear in recent years as he finished as low amateur at the 2019 Masters (T32) and the 2019 US Open (T12).

Yet, as 2020 began, Hovland was the only one of the three without a PGA Tour victory. That changed on Sunday at the Puerto Rico Open. Played concurrently with the WGC-Mexico Championship, Hovland battled down the stretch at the opposite-field event and overcame a massive muck-up of the par-3 11th hole to claim his first victory.


Ironically, Hovland stretched his lead to three shots with 8 holes to play with a chip-in for birdie on the 10th hole, but it was the same part of his game that let him down near the next green.

A poor tee shot left him right of the putting surface. Two flubbed chips and a short missed putt later, and Hovland made triple bogey.

Viktor Hovland moves from leader by 3 shots to co-leader at the @PuertoRicoOpen.#QuickHits pic.twitter.com/5Zrd94hcfU

However, Hovland was able to make good on the incredible expectations he has been saddled with. Steadying the ship with three straight pars as 40-year-old journeyman Josh Teater took the lead with a birdie on the par-5 15th hole. In a piece of poetic justice, Hovland chipped in for eagle to take the lead back, and he made a closing birdie on the 72nd hole to win by one.

In his post-round interview, the question that needed to be asked was obvious to Craig Perks: what happened on 11?

“I just suck at chipping,” Hovland said, laughing. “I definitely needed work on my short game and I was 100 percent exposed there. I can get away with it sometimes, but over 72 holes, I really need to tighten that up.”

Next up for Hovland, who with the win moves to 60th in the Official World Golf Rankings up from 102, will be breaking the PR Open curse, which has gained some traction this week, as no one who has won the tournament — notoriously including World No. 15 Tony Finau — has won another Tour event.

Peculiar stat: across the 11-year history of the @PuertoRicoOpen, no winner has gone on to win any other Tour event after their PR triumph. Only ’09 winner Michael Bradley won again…in Puerto Rico two years later. And yes, that includes ’16 champ Tony Finau.

Hovland, as you’d expect, doesn’t seem too concerned with the curse.

Unbelievable feeling! Thanks for all the messages! G’night y’all!